He thought he had married the love of his life, a beautiful innocent woman to build a family with.

They had years of courtship, got into a customary marriage in 2006, and officially signed at Home Affair in 2010. They were going to grow old together, he thought.

And his vision of their future seemed to be coming to life. They had two beautiful kids and kept making memories daily.

Until Justice Mudau started noticing changes in his wife, out of the blue.

Now instead of the memories, they have protection orders and the only place they see each other at is at court.

They made a brief appearance at the Kempton Park Magistrates Court in front of magistrate Prince Manyathi.

The case was postponed for disclosure meaning all that is in the docket must be given to the lawyers so that they can prepare for trial.

Justice, an Air BP supervisor, a father and the estranged husband of Rosemary's co-accused Nomsa Mudau, talks to Drum at court.

Rosemary showed up in true Rosemary style in an animal print camisole, new hairdo, and full makeup. She entered an already full courtroom and took the stand. They are represented by advocate Baloyi, who will be handed the docket to prepare for the trial. 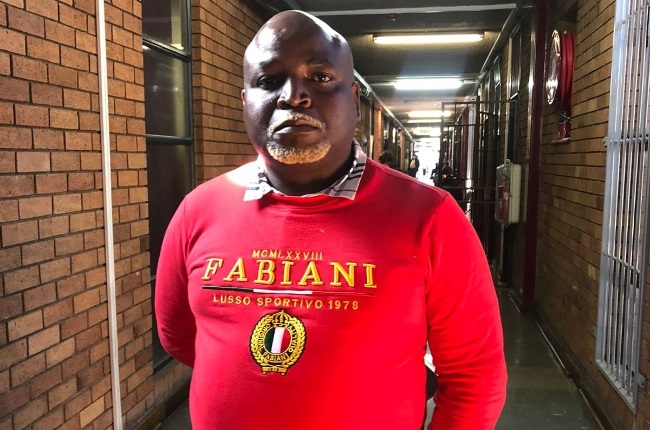 He escaped with his life and is now glad to see the wheels of justice turning.
Drum Snazo Notho

Nomsa’s ex-husband says it feels good to see the wheels of justice turning. He opened a case in 2018 against his former wife who allegedly conspired to have him killed for financial gain with the infamous Rosemary.

He says he is a firm believer in justice, and since she made the bed, she must lie on it.

“And I am saying this without any bitterness because if we protect criminals, we will never get things right in this country.

"Being in court today brings relief and hope for our criminal justice to show that no one is above the law. Above all, this case is about educating people, particularly women in the sense that as much as we are men, there are good men out there who are very much against GBV and we don't want to be reviewed as fat cheques."

Justice says the idea that people should make money out of their partners should come to an end. Some people have died in the very same way with people never knowing what happened to them, he tells Drum.

"Perhaps we trying to send the statement out there to say we know and the state knows that people are being murdered for financial gain and it needs to come to an end," he says.

They are currently not on speaking terms with Nomsa and their two children currently stay with him.

"I am staying with our kids and unfortunately she doesn't have access to the kids. She is not being denied but the kids do not want to see her. The relationship between the kids and her has broken down because they fear for their lives. At the moment we are just different people who can't even greet or talk to each other," Justice says.

In a million years he could never have imagined their relationship turning out like this, he says. They had dreams and plans as a couple.

"We are back to square one now, we are divorced, and we are on our own and I didn't imagine that we will end up here. When we started it was okay until late 2008 when she started to isolate me from my friends and family," Justice says.

He says when he wanted to assist his family the wife would allegedly tell him not to assist anyone and the visitations were monitored and limited.

"She stole my happiness"

"That when I saw the signs that my life here could be in danger or we were no longer in the same vision of the family. When we officially signed, she stole my happiness from that time. I felt like I was trapped in the marriage and I still hoped that we could resolve things when you love somebody you persevere a lot. I stood by her until I couldn't anymore it was too much for me."

Justice says what is important to him is that she is finally getting her day in court, irrespective of her previous status as an ex-cop.

The case is postponed for next week Tuesday, 31 May 2022 at Kempton Park Magistrate court.

We live in a world where facts and fiction get blurred
In times of uncertainty you need journalism you can trust. For 14 free days, you can have access to a world of in-depth analyses, investigative journalism, top opinions and a range of features. Journalism strengthens democracy. Invest in the future today. Thereafter you will be billed R75 per month. You can cancel anytime and if you cancel within 14 days you won't be billed.
Subscribe to News24
Next on Drum
'The real question is why them?' – asks pathologist who did autopsies on teenagers who died at ECape tavern