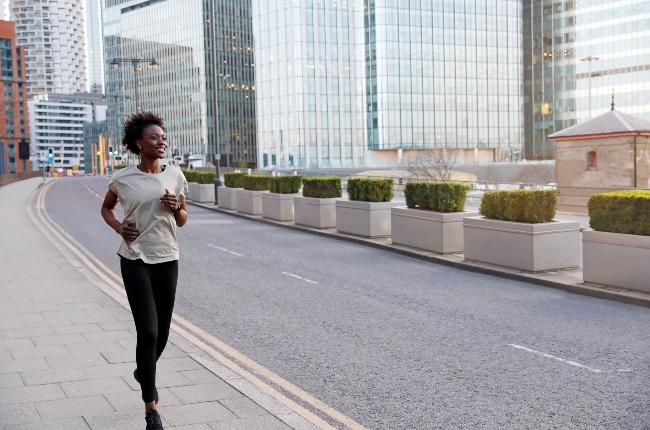 Going out for a run can be daunting as many women in SA get catcalls and are harassed by men in the streets.
Nick David/Gallo Images

You decide to go for a walk or run around your neighbourhood. It's all well and good till you see a man or three walking towards you.

You tense up, hold your keys a little tighter, look around for escape routes and start saying a small prayer. And when they start catcalling or whistling at you, your anxiety levels spike.

This is a common experience for women in South Africa, who constantly live in fear of being harassed or assaulted. And this starts at a young age.

Read more | Victim blaming, patriarchy and defining rape: All you need to know about rape culture

It may have seemed normal, albeit uncomfortable, when you were growing up: the ogling and gawking at girls' developing bodies and women's butts and breasts.

In fact, some men still insist it's wrong to let a woman pass by without commenting on her appearance. But this is just plain abuse.

Gender-based violence (GBV) is a major problem in South Africa and it is not limited to physical or sexual assault. There are other forms of abuse that women are subjected to which include catcalling or street harassment.

And it's not just black people who practise things such as ukushela which sometimes make women feel objectified.

"Women are from their teens subjected to the sexualization of their bodies," clinical psychologist Dr Esther Price says.

"Even if a woman is running, wearing gym pants and a long T-shirt, men will find a reason to make unwarranted comments. This behaviour is violent and degrading."

Catcalling and making inappropriate remarks to girls and women in inappropriate contexts is all part of rape culture, she explains.

"Rape culture is a problem in South Africa and it is disheartening. It is something that is very important to unpack in a GBV society because it is a serious problem that is entrenched in our communities,” she says.

Dr Price says women go to great lengths to protect themselves by carrying taser guns or getting someone to drive by, closely behind them so that in the event of any kind of harassment so they can quickly get to safety.

"It is patriarchy and toxic masculinity of not wanting to ask a woman out or to woo her, but to just take her body as if he is entitled to her,” says Dr Price, adding there has to be more dialogue about this.

“A lot of conversations in male spaces need to change. As a society we need to look at the way we raise our boys. From a young age, they should be allowed to show their emotions and not be shamed for showing emotions. Let a boy cry if they want to, otherwise what happens to their emotions when they are not let out?” she says.

Gender activist Mbuyiselo Botha says the objectification of women and rape culture are rooted in patriarchy and other social inequalities.

“Men feel that women’s bodies belong to them and thus, they can do what they wish with them," he says.

"Men have been socialised for decades, that they are the superior beings, this is a function of patriarchy. As a consequence, men exert dominance and power even when women are doing the most mundane tasks.

"Men see women’s bodies as existing to serve them and thus women don’t have ownership their bodies. And that is why, women will be catcalled, stalked and harassed at any turn, because to men, that body is mine to enjoy."

We live in a world where facts and fiction get blurred
In times of uncertainty you need journalism you can trust. For only R75 per month, you have access to a world of in-depth analyses, investigative journalism, top opinions and a range of features. Journalism strengthens democracy. Invest in the future today.
Subscribe to News24
Next on Drum
Why more children are testing positive for Covid-19 this time