Ramaphosa’s challenge may be bigger than that faced by Mandela

When Nelson Mandela came to power in 1994, he faced the challenge of uniting a nation divided by apartheid and healing an economy shattered by sanctions and mismanagement.

A quarter of a century later, his one-time protege Cyril Ramaphosa faces perhaps even bigger obstacles.

Nine years of scandal-tainted rule under former President Jacob Zuma left South Africa with little economic growth, dysfunctional state companies, escalating debt and an investor-confidence crisis. In 1994, the country basked in the glory of liberation and benefited from the attendant international goodwill. That moment has passed and expectations for reform under Ramaphosa, a seasoned businessman, are higher than under Mandela.

Economic growth during Mandela and his successor Thabo Mbeki’s rule accelerated to more than 5% by the mid-2000s as they made policy decisions that were unpopular with their leftist allies. With Ramaphosa, 66, beholden to the labour unions opposed to the steps needed to fix the economy, it’s hard to see how he’ll make progress.

The following charts show some of the economic challenges Ramaphosa faces: Zuma left Ramaphosa facing a mountain of debt and a lack of competence in government institutions.

Last week, Finance Minister Tito Mboweni warned that state bailouts for troubled power utility Eskom threaten to ensnare the nation in a debt trap. Moody’s Investors Service cut its outlook on the country’s credit rating from stable to negative on November 1. With the country already holding Moody’s lowest investment grade rating that moved it one step closer to being rated a junk by all three major ratings companies. “If you look at the numbers on debt, the deficit, tax-to-GDP and growth, the environment faced by Ramaphosa and his administration shows strong similarities to that inherited by Mandela and Mbeki,” said Frans Cronje, director of the Centre for Risk Analysis in Johannesburg.

“We are still on our feet,” he told lawmakers on October 31. “We will resolve these problems.”

That may be a big ask.

“Zuma and his allies erased about 20 years of progress,” said Claude Baissac, the head of Eunomix Business and Economics Ltd., which advises on political risk. Now “we don’t have a consensus, we don’t have the euphoria of liberation and great leaders. It’s not very clear what the plan is. They look like reindeer caught in the headlights.”

While debt, the highest unemployment rate in at least 11 years and insufficient power supply plague the South African economy, its biggest crisis is the lack of confidence caused by the government’s indecision on reforms. “Mandela and Mbeki had advantages that Ramaphosa does not enjoy,” Cronje said. “They were firm in isolating left-wing ideological influences in order to force pragmatic policy onto their party. Ramaphosa, on the other hand, indulges and appeases such influences, with the result that structural reform is permanently delayed while policy overall remains net hostile to investment.”

That means that investment is meager and even though Ramaphosa will on Tuesday convene his second investment conference, South Africa is competing against a host of nations for attention. Many of them have clearer policies and better financial metrics.

“The ground is shifting and no one is going to give South Africa a free pass,” Baissac said. 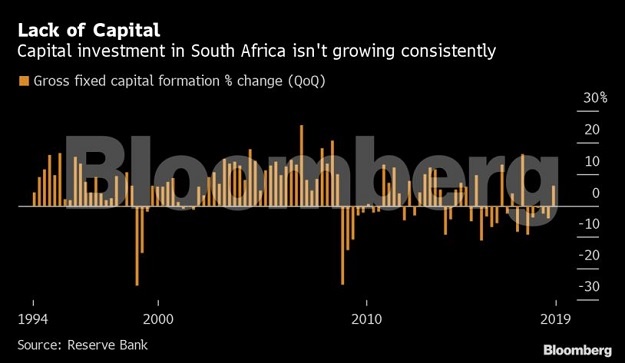 “Many of the issues are very complex. There are vested interests. Nobody wants to make a mistake,” Mcebisi Jonas, a former deputy finance minister who now serves as an investment envoy for Ramaphosa, said in an interview. “Nobody would oppose the need for growth.”

Related Links
Mboweni on Moody's: South Africans, it is time to roll our sleeves
OPINION: Mboweni battles the ANC with his nightmare budget
Mboweni: A whole engine has disappeared at SAA Technical
Share
Next on Fin24
ANALYSIS | Mboweni's zero-based budget - the backstop before a spiralling debt crisis?