Moody’s Investors Service in November gave South African Finance Minister Tito Mboweni just under four months to come up with a credible plan to rein in government debt and get the economy growing.

The following charts show how tough that task was and what Mboweni has had to deal with to prepare Wednesday’s budget review. Mboweni is likely to present a lower economic-growth forecast than in October, after power cuts intensified toward the end of 2019 and as the National Treasury accounts for risks associated with the impact of the coronavirus on global growth and demand for South African commodities. Since the start of the year, the International Monetary Fund, the World Bank and the Reserve Bank have all cut their estimates for 2020. 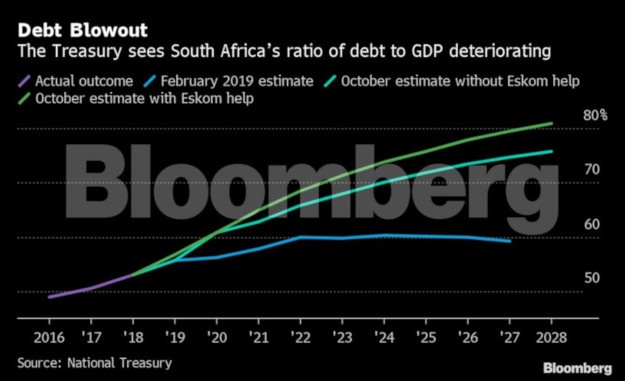 Government debt could surge to more than 80% of gross domestic product in the 2028 fiscal year due to bailouts for state-owned companies including Eskom and South African Airways. That’s unless Mboweni announces urgent steps to deal with their deteriorating finances. The cost of servicing debt is the fastest growing expenditure item in the budget, crowding out spending on health and social services. With revenue collection forecast to undershoot targets for the sixth straight year and the minister’s scope to plug the gap by raising taxes limited by slow economic growth and an unemployment rate near 30%, the budget deficit could be even wider in the year through March 31 than Mboweni projected in October. According to the median estimate of 24 economists surveyed by Bloomberg, the shortfall for this year will be a decade-high 6.3% of GDP and will widen to 6.4% in 2020-21. President Cyril Ramaphosa said in his February 13 State of the Nation Address the government is engaging with labour unions on plans to contain the public-servant wage bill, but it will difficult for the minister to present concrete steps to reduce expenditure. State payroll costs make up 35% of spending and trade unions have ruled out a review of an existing three-year wage agreement that expires in 2021. They’ve said they won’t accept pay cuts in the next deal. A budget with more bad news would prompt Moody’s to remove the country’s last investment-grade credit rating. That’s after the company cut the outlook on the nation’s assessment to negative in November and said it wants to see a feasible strategy to contain rising debt.

Of 19 economists surveyed by Bloomberg this month, 14 expect Moody’s to downgrade the country to junk this year and nine of those say it’ll happen in the first half. Moody’s is scheduled to announce its next assessment of South Africa on March 27. A downgrade would cause South Africa to fall out of the FTSE World Government Bond Index, which could prompt a debt selloff and outflows of as much as $15 billion, according to Bank of New York Mellon Corp. Traders are anticipating wider price swings in the rand after the budget. One-week implied volatility, based on prices of options to buy and sell the currency, soared 5.95 percentage points in the past week to the highest since August. A more volatile rand would reduce the chance of further interest-rate cuts this year, which would’ve helped fuel economic growth. Moody’s last week criticised the South African Reserve Bank for too-tight policy in the face of a sluggish expansion.

--With assistance from Sarina Yoo and Robert Brand.

Related Links
10 things to look out for in Mboweni's 2020 Budget address
Govt reviews pay of public servants, Cosatu threatens 'declaration of war'
Join us at the News24 post-Budget event with Pravin Gordhan
Share
Next on Fin24
ANALYSIS | Mboweni's zero-based budget - the backstop before a spiralling debt crisis?

See all newsletters
Voting Booth
How has Covid-19 impacted your financial position?
Please select an option Oops! Something went wrong, please try again later.
I'm not really directly affected
18% - 2015 votes
I am taking a hit, but should be able to recover in the next year
23% - 2634 votes
My finances have been devastated
35% - 3948 votes
It's still too early to know what the full effect will be
25% - 2826 votes
Previous Results
Covid-19 Money Hub
Covid-19 Money Hub - answering your business and money questions during the crisis