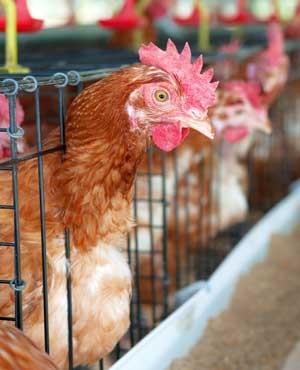 Johannesburg - South African chicken producers will ask the government to help them guarantee electricity supply to the nation’s biggest abattoirs as almost-daily load shedding is harming the birds’ welfare and creating health risks.

The slaughterhouses, some of which can process as many as 13 000 chickens hourly, can’t rely on generators as they aren’t able to create sufficient power for their needs, South African Poultry Association chief executive officer Kevin Lovell said.

The birds are typically stunned unconscious by electrocution before they are decapitated while hanging upside down, he said.

When power cuts interrupt the process, the birds “have been stunned but they haven’t been killed; they’re hanging upside down and they’re coming back alive,” he said at Bloomberg’s offices in Johannesburg last week.

“It’s a real problem. And it’s a huge waste problem because everything that stops in the process, sometimes hundreds of tons, has to be cleared. You have to clean and sterilise everything and then you have to dump at a medical waste site.”

Eskom has cut supply almost every other day this year as it struggles to meet demand amid regular breakdowns of plants and delays starting up new units. While load shedding follows schedules, it is sometimes imposed at a few minutes’ notice.

SAPA, as the poultry lobby is known, will approach the Department of Agriculture, Forestry and Fisheries about asking Eskom and municipalities to directly control power supply to 20 of the largest slaughterhouses, which process about 80% of the country’s production, and provide about eight hours’ notice before cuts are introduced, Lovell said.

Eskom will attempt to accommodate the needs of the poultry industry once producers have made an approach, Eskom spokesperson Khulu Phasiwe said by phone on Tuesday.

A company operating in the Western Cape has arranged that it gets forewarned about planned disruptions and switches off supply to its feed mill during the day in exchange for not having electricity to its abbatoir cut, Lovell said.

“Maybe that’s the sort of solution we can come up with,” he said.

Sufficient warning will limit losses and help processors and farmers plan transportation of the birds more efficiently, he said.

“Farms need to be no more than two hours away from abattoirs as that’s the sort of time period that the chickens can safely be contained in those crates” on trucks, he said. “If it starts to take longer than that, you start to get mortalities.”

About 58% of Eskom’s electricity sales are to direct customers such as mines and factories, with the rest is sold to municipalities who then distribute to residents and businesses, according to the company’s 2014 annual report.

We live in a world where facts and fiction get blurred
In times of uncertainty you need journalism you can trust. For only R75 per month, you have access to a world of in-depth analyses, investigative journalism, top opinions and a range of features. Journalism strengthens democracy. Invest in the future today.
Subscribe to News24
Related Links
US deal may cost poultry sector 6 500 jobs
SA poultry producers' shares fall on US chicken imports
Govt sells Vodacom stake to fund Eskom
Next on Fin24
Red wine, craft gins, espresso: Rooibos gets a facelift