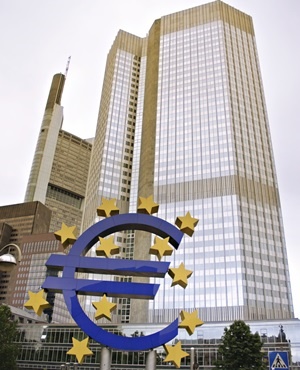 Frankfurt - The European Central Bank (ECB) is about to give lenders a last offer of free long-term cash. In return, it’ll get a sense of any concern over the outlook for its extraordinary stimulus as the economic recovery spurs calls for an exit plan.

The final round of Targeted Longer-Term Refinancing Operations - four-year loans at an interest rate that starts at zero and could go lower - will be allotted to banks on Thursday at 11:30. The take-up could be as low as €30bn or as high as €750bn, according to a Bloomberg survey, with a median estimate of €110bn.

The size of the so-called TLTRO-2 offer could give critical insight into lenders’ thinking as they consider the end of a stimulus spree by the ECB that has given them access to ultra-cheap cash to keep credit flowing to the real economy.

While current guidance foresees a significant pause between the end of the ECB’s bond-buying programme - predicted in an earlier Bloomberg survey to be around mid-2018 - and the first rate increase, some ECB policy makers have said that gap could be shortened or the sequence reversed.

For banks, that might mean time is running out to get their house in order.

“The banking sector’s capacity to fully support the euro area’s recovery is curtailed by its low profitability,” President Mario Draghi said in the annual report for the ECB’s bank-supervision arm on Thursday.

“Overcapacities, inefficiencies and legacy assets contribute to banks’ low profitability. It is up to the banks themselves to find appropriate answers to these challenges. And for the sake of a strong recovery in the euro area, they must do so quickly.”

The ECB started its first series of TLTROs in September 2014, with a second series on more lenient terms getting under way last year. The 11 operations so far have delivered a net €570bn to lenders as part of a package of monetary easing that also includes negative rates and a €2.28trn quantitative-easing program.

“Demand for this operation was always going to be higher than the prior TLTRO-2s as it is the final opportunity to secure cheap liquidity over four years,” said  Alan McQuaid, an economist at Merrion Capital in Dublin. “However, increasing concerns that the ECB will lift interest rates sooner than originally thought is likely to provide an added boost to demand.”

The amount banks can borrow is linked to the size of their loan books, in an attempt to spur lending to companies and households. According to 70% of respondents in the Bloomberg survey, that strategy has been successful.

Yet while the eurozone has posted 15 quarters of economic growth and seen inflation climb to 2%, officials are wary of declaring victory. The growth in consumer prices is largely driven by energy, with core inflation subdued and hard data such as industrial production volatile.

Even so, a debate is brewing over how and when stimulus can be withdrawn.

Some policy makers raised the issue of sequencing at the March 9 Governing Council meeting, signaling nascent pressure to begin an official discussion on normalization sooner rather than later. Governors including Austria’s Ewald Nowotny and Italy’s Ignazio Visco have stated publicly that the current forward guidance could be reviewed.

Investors have taken notice and are now pricing in a more than 50% probability of an increase in the deposit rate - currently at minus 0.4% - by December. A month ago, the chance was just 11%.

That’s a mixed blessing for the ECB. While it’s a sign of confidence, speculation over a rate increase pushes up market borrowing costs and so threatens to weigh on the economy. At a time when the eurozone faces political risks from elections, British plans to leave the European Union, and the US administration’s disdain for global trade rules, that’s an unwelcome complication.

Yet banks, which have seen their profitability squeezed by negative rates, could welcome a tightening that gives them room to boost their loan rates, and that adds to the incentive to lock in the cheap four-year funding offered by the TLTRO now.

“It turns out the ECB hasn’t properly thought through its exit strategy from stimulus yet, despite what was implied in its guidance,” said Richard Barwell, an economist at BNP Paribas Investment Partners in London. “In a situation where markets think rates might rise sooner, TLTROs are a license to print money for the banks.”

We live in a world where facts and fiction get blurred
In times of uncertainty you need journalism you can trust. For only R75 per month, you have access to a world of in-depth analyses, investigative journalism, top opinions and a range of features. Journalism strengthens democracy. Invest in the future today.
Subscribe to News24
Related Links
ECB keeps rates unchanged amid inflation flare-up
Eurozone economy expands most since 2011
Eurozone inflation hits 2% as ECB debates policy stance
Next on Fin24
Regulator withdraws warning against crypto platform, says it falls outside its jurisdiction