Johannesburg - Aspen Pharmacare Holdings [JSE:APN] shares slumped to the lowest in more than four months and trading volumes surged after the UK’s GlaxoSmithKline said it has disposed of the final portion of its stake in Africa’s largest generic drug maker.

Glaxo sold 28.2 million shares, equal to 6.2% of Aspen’s ordinary share capital, to institutional investors for 300 rand each or R8.47bn according to a statement on Thursday. 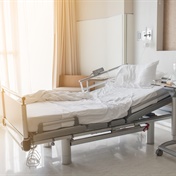