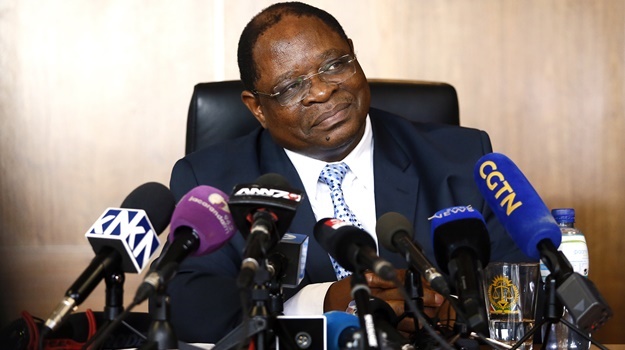 Deputy Chief Justice Raymond Zondo, head of an investigation commission into corruption allegations at the highest levels of the state. (Phill Magakoe, AFP)

A 2013 deal between national broadcaster SABC and MultiChoice was irregular and amounted to "policy capture" according to evidence heard by the judicial commission of inquiry into state capture inquiry on Tuesday.

The inquiry has been investigating allegations of state capture, corruption and fraud since August 2018. On Tuesday it turned its attention to the SABC.

Yunus Carrim, the former Minister of Communications, Telecommunications and Postal Services, told the inquiry a 2013 contract between the SABC and MultiChoice not only entrenched the pay-TV operator's monopoly, but also undermined government's objective of bridging the divide between the rich and poor.

MultiChoice, in response, has accused Carrim of making "baseless" allegations, without specifying which parts of his testimony it is referring to.

“MultiChoice has noted that Yunus Carrim confirmed under oath in his submission to the Zondo Commission of Inquiry today that he cannot attest to having personal knowledge of any fraud or corruption in respect of the SABC/MultiChoice agreement. Carrim’s allegations concerning MultiChoice and some of its officials are baseless," said MultiChoice Group Executive for Corporate Affairs Joe Heshu.

"MultiChoice and its officials deny these allegations. We have informed the Zondo Commission that we will respond to the allegations made against us in due course and reserve all of our rights.”

According to Carrim, the public broadcaster agreed to MultiChoice's position to not encrypt set-top boxes during a migration from analogue to digital. MultiChoice, he said, had been opposed to the set-top boxes, with the support of some executives at the SABC, allegedly including former board chair Mbulaheni Maguvhe and ex-COO Hlaudi Motsoeneng in what he referred as "regulatory policy capture."

"There has been a lot of evidence before this commission which looked at the capture of state organs, but here were were dealing with the capture of regulatory policy," he said.

Earlier, in an internal message to staff, MultiChoice CEO Calvo Mawela instructed staff to "not be distracted" by allegations which may be aired at the state capture inquiry.  Mawela did not say in his message what the allegations were, but said MultiChoice "emphatically deny" them. He told staff that MultiChoice complied with the law, regulations and best practices in all its markets, including South Africa.

Carrim, who was minister between July 2013 and May 2014, said on Tuesday that the R500 million agreement also required the SABC to surrender its archive material. This made him unpopular, and may have threatened his future in government, he said.

Carrim told the inquiry that, in terms of the agreement, MultiChoice would pay the SABC R553 million over a period of five years for SABC's 24-hour news channel, and that MultiChoice would have exclusive access to the SABC's archives.

He further stated that his ministry did not understand the gravity of the agreement at first. Once they realised its implications, they mandated staff to look into it.

Allowing the SABC to forego encryption and allowing MultiChoice unrestricted access to SABC archive was a cause for concern as the archives contained important historic material, he said.

*This article has been updated to include a statement from MultiChoice in reaction to testimony from Carrim.

We live in a world where facts and fiction get blurred
In times of uncertainty you need journalism you can trust. For 14 free days, you can have access to a world of in-depth analyses, investigative journalism, top opinions and a range of features. Journalism strengthens democracy. Invest in the future today. Thereafter you will be billed R75 per month. You can cancel anytime and if you cancel within 14 days you won't be billed.
Subscribe to News24
Related Links
MultiChoice CEO emails staff to 'not be distracted' by testimony at Zondo Inquiry
MultiChoice loses out to China on AU television studios deal
MultiChoice assists South African police arrest suspect, in crackdown on piracy
Next on Business
Elon Musk's Tesla shows latest robot prototype with opposable thumbs