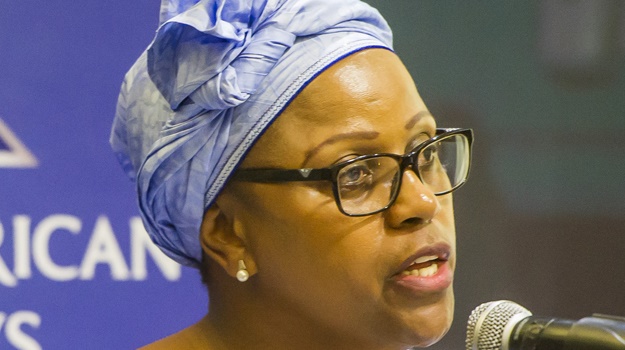 Controversial former South African Airways (SAA) chair Dudu Myeni was not able to appear in person at the Zondo Commission into state capture on Wednesday due to exposure to Covid-19 exposure.

She was linked to the proceedings via an internet link, which initially gave some problems due to a lack of bandwidth.

"The notification of Covid-19 exposure happened while my day helper was in the house so she is here and my legal helper is here. That is why I could not come before the commission. I am observing progress on my side and taking the necessary precautions. I have not felt anything yet, but the other person is confirmed positive," Myeni explained to Zondo. Her image was projected on a big television screen.

Evidence leader adv. Kate Hofmeyr informed Myeni at the start of proceedings that she is not allowed to get any "help" during her testimony and that if her legal representatives wanted to communicate with her, they must indicate as much and the commission would adjourn for that purpose.

Deputy Chief Justice Raymond Zondo informed Myeni that she might have to come in person at some stage when her health permits.

Earlier this year Myeni was declared a delinquent director by the Pretoria High Court, due to her actions while on the board of SAA.

Once Myeni's virtual link was finally established, she told Zondo that, although she respects the commission and wishes to assist, she is in a difficult position "because there is a court order directing that I be charged in this regard". This did not, however, mean that proceedings could start, because she then claimed that she intends not necessarily to answer any or all of the questions put to her.

"I am anxious that I am being compelled to forego my Constitutional right not to incriminate myself. In my affidavit made for the Commission I refer to the relevant documentation," said Myeni.

"I always act responsibly. I am willing to attend and deal once and for all with all the false accusations made in my absence, but there is a court judgment which I have been advised to appeal and I want to exercise my right and answer where I can and be silent where I can."

This led to the proceedings being halted so that the evidence leader and Myeni's legal representatives - who were present in person at the venue - could discuss what types of questions she would be prepared to answer and which not.

Just before the adjournment, Zondo told Myeni that the commission would not seek to intentionally and legally infringe on her constitutional rights. He added that there had been occasions in the past where witnesses had taken more or less the same attitude.

During the delinquent director trial, Sylvain Bosc, a former chief commercial officer at SAA, testified that it was "not uncommon" for Myeni to "invoke" the name of former president Jacob Zuma to get things done. Bosc testified that, by failing to sign an expanded code-sharing partnership with Emirates in 2015, SAA lost out on an opportunity to generate income and caused a great embarrassment as the deal faltered at the last minute. Evidence before the court indicated that the expanded relationship with Emirates would have earned SAA $100 million in annual revenue.

The court heard Myeni instructed then interim CEO Nico Bezuidenhout, shortly before the signing of an MOU in this regard in June 2015, not do go ahead. She alleged the instruction came from former president Jacob Zuma. She, therefore, interfered in operational matters.

We live in a world where facts and fiction get blurred
In times of uncertainty you need journalism you can trust. For only R75 per month, you have access to a world of in-depth analyses, investigative journalism, top opinions and a range of features. Journalism strengthens democracy. Invest in the future today.
Subscribe to News24
Related Links
SAA bailout like taking from the poor to save the 'well-to-do' - Commission
SAA board adopted unlawful approach to BEE, state capture inquiry told
Hands off SAA ownership: Unions hit back at critics of R10.5bn lifeline
Next on Fin24
Sasol to sell interest in US chemical group for $404 million to pay down debt