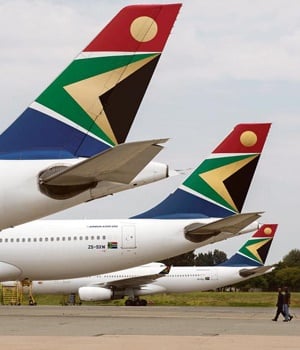 SAA planes sit on the tarmac at the OR Tambo International Airport in Joburg.

Speculation that South African Airways is in danger of going under could become self-fulfilling.

The national carrier has been given R57bn in bailouts since 1994 and last made a profit in 2011. Its already precarious finances took another hit last month when workers staged a week-long strike that grounded a number of flights, and customers have canceled bookings on others.

The extent of the carrier’s cash crisis was on stark display when it missed a deadline to publish its financial statements, due at the end of October, and delayed paying workers’ their full salaries for November.

While Public Enterprises Minister Pravin Gordhan has said he’s working on a plan to enable SAA to continue operating and become viable - further details will be released this week - Finance Minister Tito Mboweni has said it would be better if the airline was shut down.

“SAA is now looking over the edge of a financial abyss,” said Raymond Parsons, a professor at North West University’s Business School in Potchefstroom.

“Its balance-sheet viability game is now very much in injury time. Tough strategic decisions need to be urgently implemented to put it on a sustainable footing and to regain the confidence of customers and other stakeholder."

Companies are losing faith that the airline can and will be saved. On November 28, Sanlam’s Travel Insurance Consultants unit said it will exclude SAA from its insolvency cover. That announcement and the government’s mixed messages about bailing out the airline again prompted Flight Centre Travel Group, one of South Africa’s biggest travel companies, to stop selling the state airline’s tickets.

“We have had to make an immediate move to mitigate the risk to ourselves and our clients,” said Andrew Stark, Flight Centre’s managing director for Middle East and Africa.

The biggest and most immediate impact of the loss of insurance cover and travel agency bookings will be on SAA’s domestic business-travel revenue, according to Joachim Vermooten, an independent airline economist.

The effect on its international business will take longer to determine, because the bulk of passengers on those flights are tourists, he said. Many of them book tickets well in advance, and it’s too early to say whether the airline can survive, Vermooten said.

SAA, which offers flights to more than 30 local and international destinations, began operating in 1934 when the government took over the assets and liabilities of Union Airways. The government sold a 20% stake in the carrier to Swissair in 1999 and bought the shares back in 2002 after the Swiss carrier went bankrupt. While the government has said it will consider selling an equity stake, no tangible progress has been evident.

Parliament’s tourism committee said in a statement the carrier must keep flying and called on President Cyril Ramaphosa to intervene and restore it to financial stability. Even if the government were to intervene, it would struggle to come up with the money at a time when its own finances are under pressure, the economy is stagnating and it’s facing calls from other state companies for bailouts.

Alf Lees, finance spokesperson for the Democratic Alliance, urged the government to take a hard line.

“If government gives it more money, SAA will simply continue with its bad business practices and then will end up in the same situation again in the near future,” he said.

We live in a world where facts and fiction get blurred
In times of uncertainty you need journalism you can trust. For only R75 per month, you have access to a world of in-depth analyses, investigative journalism, top opinions and a range of features. Journalism strengthens democracy. Invest in the future today.
Subscribe to News24
Related Links
Despite financial woes, SAA manages to pay November salaries
UPDATE: Santam, Hollard confirm withdrawal of insolvency benefit cover on SAA tickets
Flight Centre SA to stop selling SAA tickets until 'certainty' returns to the market
Next on Fin24
Toyota's Johan van Zyl has died

See all newsletters
Voting Booth
In light of the recent looting, do you think a basic income grant is the right approach to deal with SA’s hunger and poverty problems?
Please select an option Oops! Something went wrong, please try again later.
It will go a long way in helping fight the symptoms of SA’s entrenched inequality, especially for those who are starving right now
20% - 1490 votes
SA’s problems are complex, and we instead need to spend that money on building and growing our economy, which will help the country in the long run
31% - 2305 votes
All grants are a problem as they foster a reliance on handouts
49% - 3646 votes
Previous Results
Covid-19 Money Hub
Covid-19 Money Hub - answering your business and money questions during the crisis