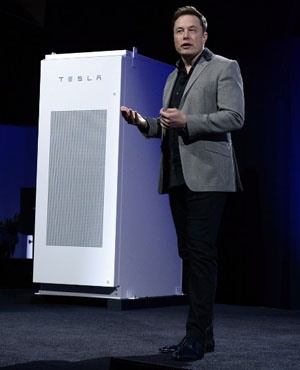 Hawthorne - After shaking up the auto world with its electric cars, Tesla is tackling a new frontier in "green" transportation with the unveiling of a futuristic all-electric semi truck.

Elon Musk, the South African-born inventor and entrepreneur, showcased the new vehicle Thursday in Hawthorne, California, site of Tesla's design bureau and the headquarters of the billionaire's aerospace company SpaceX.

With a sleek, aerodynamic profile, the Tesla Semi is billed as quicker and more economical than today's diesel-powered trucks.

"We designed the Tesla truck to be like a bullet," said Musk, Tesla's co-founder and chief executive who aims to start production in 2019 with deliveries by 2020 - although some analysts expressed caution over Tesla's ability to meet its own timetable.

With four independent electric motors and a transmission that requires no shifting of gears, the Semi can accelerate to 100 kilometers per hour in five seconds - reaching that speed in 20 seconds while hauling a maximum 36 000 kilogram load, much faster than a traditional diesel truck, Tesla says.

Most crucially, it can travel 800 kilometers between charges, more than double the length of most truck routes, 80% of which, according to Musk, are 250 miles or less.

"So it means you can go to your destination and back without recharging," he said.

Tesla claims its Semi, which could be recharged at the firm's 1 000 free Supercharger stations worldwide, can save 20% over conventional transport rigs with fuel and insurance factored in - while delivering a "better experience" for truck drivers through its cab design.

With no front engine or gear shift to accommodate, the driver's seat is positioned in the center of a panoramic windshield, with a dominating view of the road.

Instead of the traditional console, there are touch screens for navigation, music and traffic data.

Inside, the cab has enough head and legroom to stand up and walk around. The traditional second front seat is relegated to the back of the cab as a jump seat.

The Semi also uses some of the same navigation aids as Tesla's Model 3 sedan, such as cameras, and sensors designed to minimize blind spots, abrupt lane changes and emergency stops.

But despite the truck's glitzy debut, some analysts warned it remains unclear if or when Tesla can deliver on its promises.

Lindland added however that Musk "is not great at keeping deadlines" and that "we need to add weeks, months or years" to his timetable.

Another concern is that Tesla is bleeding cash as it invests in new vehicles like the Model 3, a more affordable electric sedan.

"Wall Street continues to be very tolerant of Elon Musk's strategy, as they consider it a tech company and not an automobile manufacturing company," Lindland said.

"But there will come a time when investors won't be as tolerant and will need to start seeing profits."

Joseph Spak of RBC Capital Markets said he was impressed by the truck, saying its specifications "exceeded expectations."

"While Tesla has had challenges meeting deadlines, it does eventually get there," Spak said in a research note. "As such, expect the topic of the electrification of (cargo trucks) and Tesla's disruption of that segment to step up."

Tesla's Semi is arriving at a time when a variety of automakers - Daimler, Volkswagen, Nikola, Einride - are also developing electric truck prototypes, some equipped with autonomous driving functions and futuristic designs.

Experts note that heavy goods vehicles and buses already are being powered with alternative energy sources like hydrogen batteries or natural gas.

Tesla has not given out details on how much the trucks will cost or where they will be built.

Related Links
German carmakers urged to challenge Tesla by Merkel chief
Electric cars the future - also for SA
Tesla's Musk: plans for semi-truck launch
Share
Next on Fin24
Alcohol ban could be the perfect brew for contempt towards the state

See all newsletters
Voting Booth
Do you think it was a good idea for the government to approach the IMF for a $4.3 billion loan to fight Covid-19?
Please select an option Oops! Something went wrong, please try again later.
Yes. We need the money.
11% - 890 votes
It depends on how the funds are used.
74% - 5901 votes
No. We should have gotten the loan elsewhere.
15% - 1187 votes
Previous Results
Covid-19 Money Hub
Covid-19 Money Hub - answering your business and money questions during the crisis