Glencore moguls prepare to up their bets 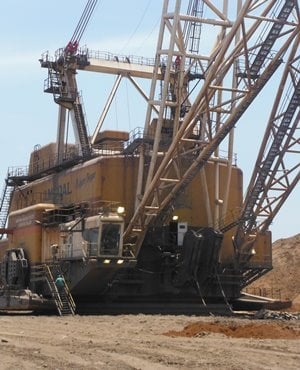 London - Four years after a stock market listing made them billionaires, and months after the last ban on them selling shares expired, most Glencore managers are still sticking with their boss Ivan Glasenberg - and even preparing to invest more in the firm.

The loyalty comes as a surprise to many industry players, particularly in light of the company's current woes which forced it to suspend dividends this week and announce plans to sell new shares to cut its $30bn debt pile.

Rivals and hedge funds had already long bet the managers - some of the world's top traders like Alex Beard for oil and Tor Peterson for coal - would be unable to resist the temptation to cash out after decades of service for the commodities giant.

"I had been honestly thinking most guys would be somewhere like in the Bahamas by now. It is quite extraordinary that most of them are still around," said a senior executive at one of Glencore's trading rivals.

At the time of the $10bn London flotation in 2011, a possible exodus of management was a big concern among potential investors, so Glencore imposed bans - or lock-ups - on selling shares for stipulated periods after the listing.

The last of these expired in May this year, apart from those constraining the CEO and finance chief - but not only have most of the directors held onto their shares, they plan to buy more in the new issue to prevent their stakes being diluted.

"We had calls from hedge funds recently asking if Alex or Tor or somebody else sold out. No one did. And everyone will be investing in a new equity issue," said a high-level source at Glencore.

Plans for the $2.5bn issue were announced on Monday as the mining and trading firm acknowledged the severity of a commodity market slump, but the timing and shape of the issue have yet to be decided.

"What we said to shareholders is that we do not wish to be diluted. Any type of capital raising we do, the senior partners will be participating. We think that is the way to go," said chief executive Glasenberg.

Glasenberg is known for running Glencore with an iron fist and pushing through decisions, like he has done with most other crucial moves, such as the $29bn acquisition of miner Xstrata in 2012.

There is a rationale for a concerted show of confidence in Glencore's stock, which has fallen to record lows this month - down more than half this year - on fears of a major economic slowdown in China that would hit copper, coal and oil consumption.

It is designed to show that most veteran managers believe the company is seriously undervalued and stock prices will bounce back once commodities market stabilises.

One could also argue the directors became hostages of the market downturn and that the stock has fallen so sharply that there is little point in selling out now.

Since the listing, senior managers have been encouraged to hold onto their shares by the bumper dividends from Glencore, which has paid out a total of $9bn.

And even now many, aged in their 40s and 50s, are not yet ready to plan for a comfortable retirement. They are relatively young, and still ambitious and hungry for corporate glory, according to sources familiar with their thinking.

At the time of listing, Glasenberg's stake was worth $9 billion in a company valued at $60bn.

Fast-forward four years and his 8.4 percent holding, the second largest after the Qatari Investment Fund, is worth $2.3bn in a firm valued at about $27 billion - despite the fact Glencore is operationally much larger after buying Xstrata.

At Thursday's share price of 136 pence, Glasenberg with 1.1 billion shares remains the only senior manager whose stake's paper value tops $1 billion - compared with six at the time of the flotation.

The co-heads of zinc, copper and lead, Daniel Mate and Aristotelis Mistakidis, who own 417.5 million and 414.7 million shares respectively, would be worth around $874m and $868m, according to Reuters calculations.

Smaller shareholders among managers also include Chief Financial Officer Steven Kalmin with 71.5 million shares, the head of ferrochrome Stuart Cutler with 78.6 million shares and the Chairman of Kazzinc, Nikola Popovic, with 94 million.

If the new equity issue of $2.5bn goes fully ahead, the senior managers would have to contribute 22% or $550m, to retain their current stake levels, by percentage.

Glasenberg would have to personally commit $210m to the new issue. Since the IPO he has collected over $700m from Glencore via dividends.

The CEO has repeatedly said he saw the relatively young management team sticking with the company for many years.

Beard, in his late 40s, an Oxford-educated Brit has been with Glencore since 1995, and Peterson, a Swiss-educated American in his early 50s, has been with the firm since 1992. Spanish Mate and Greek Mistakidis, both in early 50s, joined in the late 1980s or early 1990s, when the company was still called Marc Rich.

Beard, Peterson, Mate, Mistakidis, Kalmin, Cutler, and Popovic all either declined to comment on were unavailable to comment.

Senior managers might, however, look with a certain envy at a small number of their peers who managed to sell out before the stock plummeted.

Back in 2012-2013, when the stock was worth two to three times what it is today, the co-heads of aluminium Gary Fegel and Steven Blumgart and the head of iron ore Christian Wolfensberger sold their respective 154.8 million, 86.7 million and 87.4 million shares. And Beard's right-hand man, Louis Alvarez, sold his 81.6 million shares and retired this year.

Investec analyst Marc Elliott said remaining bosses were taking part in the new issue as they believed Glencore could bounce back. "If you are refinancing it and you want the rest of the market to step in and help you finance it, you've got to do that," he said.

"By putting in meaningful sums of money, they are backing themselves."