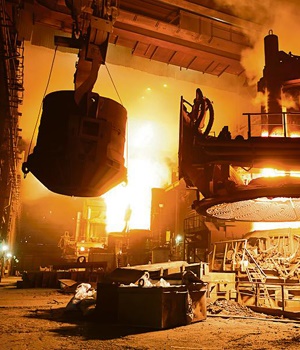 Smelters at Evraz Highveld Steel and Vanadium, a company that was almost sold recently for R1

ArcelorMittal South Africa [JSE: ACL], the largest steel company in Africa, said in a statement on Thursday that it had incurred a loss of R4.68bn for the year as the "downturn in world steel" deepened.

In the trading update for the year ended 31 December 2019, the mineral company said the loss was largely due to weak steel demand in 2019, which "presented an extremely challenging situation, especially against the backdrop of escalating geopolitical and trade tensions throughout the year".

Contributing factors to the loss included net impairment charges of R1.4bn, compared to 2018’s R10m. This was made up largely of R1bn for the impairment of the property, plant and equipment at Newcastle Works, R294m for Saldanha Works and R99m towards the closure of the tin plant at Vanderbijlpark Works, the steelmaker said.

ArcelorMittal also suffered a 9% drop in revenue to R41.4bn as sales volumes reduced by 8%, with the company noting that revenue from the coke and chemicals business fell due to lower selling prices.

"The successful blast furnace D interim repair at Vanderbijlpark Works resulted in the loss of an equivalent 272 000 tonnes of liquid steel during the planned downtime of 60 days," the statement said.

The steel producer said restructuring it announced in July 2019 - which at the time was said to place some 2 000 jobs at risk - had largely been finalised at year end.

"Through natural attrition and avoidance of vacancy filling, it has been possible to reduce the directly affected own employees, yet still reaching the cost saving targets," the statement said. According to an announcement in January, job losses stood at around 1 000.

Thursday's statement added that the shutdown of Saldhana Works was expected to be concluded towards the end of the first quarter of 2020.

ArcelorMittal noted an "intense focus on cash preservation" and cost reductions had been necessary, having released some R1.9bn from working capital alone. This was needed "along with the launching of strategic asset footprint review targeting the establishment of an affordable asset footprint with an enduring competitive advantage, and in so doing, ensuring the long term sustainability of the company".

We live in a world where facts and fiction get blurred
In times of uncertainty you need journalism you can trust. For only R75 per month, you have access to a world of in-depth analyses, investigative journalism, top opinions and a range of features. Journalism strengthens democracy. Invest in the future today.
Subscribe to News24
Related Links
ArcelorMittal SA warns of lower sales, output
ArcelorMittal braces for losses as it finalises interim results
ArcelorMittal South Africa to cut 2 000 jobs
Next on Fin24
Seller challenges Sibanye's move to scrap R15bn deal to buy mines after wall collapse