Lonmin says the Labour Court has ruled that the planned secondary strike by workers affiliated to the Association of Mineworkers and Construction Union will be unprotected, a decision the union has described as "misguided" and vowed to appeal.

The labour union had announced that its members at different mines across the country would strike in support of their colleagues at Sibanye-Stillwater gold operations, who downed tools nearly four months ago.

The JSE-listed platinum producer said a judgement passed by the Labour Court on Friday said a secondary strike "would be unprotected, preventing the union and its members from undertaking such action at the company’s operations".

"The company’s operations continue to run as normal," Lonmin said in a statement.

The union described the judgment as a "serious infringement on the right of workers" -- adding that it sets a "perilous precedent" which will prejudice the working class.

"AMCU has given instructions to its lawyers to apply for urgent leave to appeal the judgment."

According to the union, the court did not consider its "compelling arguments" regarding the purpose of a secondary strike.

On Thursday, an inter-ministerial committee met with AMCU and the National Union of Mineworkers (NUM) in Carletonville, south of Johannesburg, in an attempt to resolve the protracted strike at Sibanye.

The strike, which began on November 21, has been accompanied by acts of violence between members of the two unions. In a statement issued by the committee after the meeting, the parties, which included the Department of Mineral Resources, Police and Labour, noted that "the situation in Carletonville has become abnormal".

"The main priority is to ensure that the strike is resolved, and that the situation around Carletonville can be stabilised and return to normality," said a statement. At the core of the strike is the issue of wage increases.

Sibanye last year reached a three-year wage agreement with the NUM, Solidarity and UASA to increase salaries by R650 for the first year, R700 for the second year and R825 for the third year. AMCU rejected the deal.

The union is demanding a minimum wage increase of R12 500, with a R1 000 increase for three years. AMCU leader Joseph Mathunjwa had earlier said sympathy strikes were planned at Harmony and Impala Platinum in Rustenburg and coal mines in Limpopo. 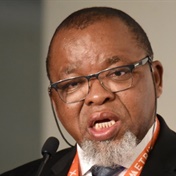