Improved legislative framework and investment in technology are some of the key reforms that should be considered by local mining as part of Covid-19 recovery plans, according to a latest report by the Boston Consulting Group.

Once the backbone of the economy, the industry has in recent years been eclipsed by other countries, as companies, particularly gold miners, battle the challenging conditions associated with deep-level mining and the country's unstable energy supply.

As a result, Covid-19 hit the industry when it was already on the back foot compared to its global counterparts, with 64% of South African mining output falling on the high half of the global cost curve.

Adding to the difficult landscape is uncertain regulatory framework and electricity supply constraints, which is said to have shaved off almost 30 days of production in 2019 due to power cuts.

"We estimate that the industry lost roughly 4% of total planned output during 2019 due to power outages," the report stated.

The report estimated that 15 to 25% of South Africa's 2020 output would be lost due to the lockdown. It also highlighted the taxing environment navigated by the sector which contributed R356 billion or 7.3% to GDP in 2018.

"Our current scenario modelling estimates that 15 to 25% of South Africa's 2020 output has been lost due to lockdown and resultant ramp-up of production," says Tycho Moncks, the managing director at the Boston Consulting Group and co-author of the report.

Mining companies were from 26 March instructed to put shafts and smelters under care and maintenance, as the government implemented sweeping lockdown regulations. Operations gradually resumed at a reduced capacity, with companies revising down their production guidance for the period.

To improve competitiveness, the report identified key reforms which might be taken to get the sector back on track, which include investing in technology, improved legislative framework, a steady power supply and investment promotion.

"Technology is the key to unlocking cost competitiveness for South African mining, and the industry should proactively look at opportunities for the appropriate investments," it said.

Bottlenecks in the rail and port infrastructure were said to inhibit the export of minerals such as iron ore and manganese. The expansion of the Saldanha Railway capacity to 87 metric tons could help improve capacity. The Sishen to Saldanha railway line, operated by Transnet, plays a key role in the ferrying of iron ore to the harbour for exports.

This month, ratings agency S&P revised its outlook for AngloGold Ashanti and Gold Fields to stable from negative on account of improved gold price, which increased 28.4% in 12 months.

The agency predicted gold and PGM prices would likely remain above long-term averages through 2022, allowing producers to lower leverage on a more sustainable, through the cycle, basis.

We live in a world where facts and fiction get blurred
In times of uncertainty you need journalism you can trust. For only R75 per month, you have access to a world of in-depth analyses, investigative journalism, top opinions and a range of features. Journalism strengthens democracy. Invest in the future today.
Subscribe to News24
Related Links
The chrome miner ready to take off
The Northern Cape holds key to unlock mineral riches in SA
Mining production continues to decrease post lockdown
Next on Fin24
Zambia sees deal with Glencore over Mopani within a month 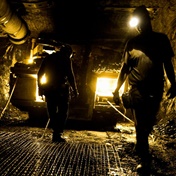 See all newsletters
Voting Booth
Have you claimed the interest on your rental deposit?
Please select an option Oops! Something went wrong, please try again later.
Yes, and I've gotten it.
22% - 334 votes
No, I did not.
51% - 788 votes
My landlord refused
28% - 426 votes
Previous Results
Covid-19 Money Hub
Covid-19 Money Hub - answering your business and money questions during the crisis