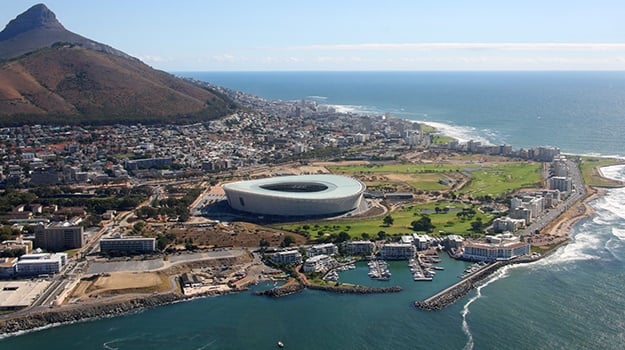 Apart from rugby, all other events will still be welcome at the stadium, including sports such as soccer and music concerts.

The 62 000-capacity stadium was constructed for the 2010 FIFA Soccer World Cup. At the time, some ratepayers raised concerns that it would just become a "white elephant" in the city's greater Waterfront area.

The new business lounge membership offering follows global trends, according to Lesley de Reuck, CEO of Cape Town Stadium. The lounge has a total of 2 100 seats. It involves the concept of a "shared-space hospitality experience", tailored to be flexible to suit individual needs. It is aimed at from the sports fanatic and business networker to the families of fans.

Membership guarantees ticket holders a selected same-seat location in the newly renovated Business Lounge area, situated directly above the halfway line. Everything is in place to start as soon as spectators will be allowed again. Business Lounge membership will offer catering options and ample space for socialising.

The lounge has three "segments": the "sports fanatics" section, a "business networker" section suitable for client entertaining and networking, and a "family of fans" section tailored towards a child-friendly option, with suitable catering options. All members will have preferential access to parking in the stadium or close by, as well as exclusive ablution facilities.

Aside from being able to attend WP Rugby senior professional matches, all members have various options of purchasing tickets and hospitality packages for other selected stadium events, including sporting events and concerts. Business Lounge members will also receive a 20% discount on any booking done when hiring the Business Lounge for private functions.

"We're looking forward to the post-Covid-19 era when we can bring spectators and concertgoers back into the stadium to enjoy a host of exciting events we're eagerly waiting to roll out. With this latest offering, we've refined our spectator experience to offer something far more spectator-focused in nature. It's fresh, modern and appealing at the same time," says De Reuck.

Since it is as yet unsure when spectators will be allowed again, interested people can already complete an "expression of interest" which will ensure they're able to secure their preferred seats.

"As soon as legislation allows the stadium to host spectators again, the organisation will conclude the sales process with prospective members. The stadium anticipates this will be around June 2021," says De Reuck. He believes that, if stadiums operate responsibly on a limited-capacity basis, and uphold Covid-19 health and safety protocols, then the re-entry of spectators is possible.

Alderman Ian Neilson, executive deputy mayor of Cape Town, says when looking at the "value" of the Cape Town Stadium and whether it is just a so-called "white elephant", one should ask various questions.

Is it being accused by some taxpayers of just being a white elephant because it is not used, or not used enough? Or because there is a financial shortfall in running it?

"If it is just about money, then one could apply the same 'test' to all the facilities run by the City. All facilities are subsidised from rates income. The question is what the expectation is of a stadium the size of the Cape Town Stadium. The nature of such large stadia all over the world is that they are not used all the time," explains Neilson.

"If, for example, we allow just about anybody to use it, that would create a problem in keeping the pitch up to national or international standards. So, it is also about the appropriate level of use and we are seeking to achieve that."

Regarding the financial side, Neilson points out that every "event facility" owned by the City requires subsidising, but that should not be what determines the value it offers to residents. Even the Cape Town International Convention Centre (CTICC), which used to be the exception to the rule about requiring subsidising, has been impacted by the coronavirus pandemic and related lockdowns.

"For me, the questions regarding the Cape Town Stadium are, therefore, whether we have managed it to optimise usage and minimise the financial impact," he says.

During the 2018/2019 financial year, the City had to subsidise the Cape Town Stadium with R55 million. This increased to R59 million during the 2019/2020 financial year. According to Neilson the latest figure would likely have been less if it were not for the impact of coronavirus lockdowns.

"We are not satisfied with that level of subsidising and want to get it as low as possible. That is why we made a long-term tenant deal with Western Province Rugby. It is a long-term agreement which will produce money for both parties. In broad numbers and on reasonable assumptions of attendance, the deal could mean about R44 million a year for the City," said Neilson.

The City also decided to build a number of executive suites - which were part of the original design plan in any event. This will cost the City about R22 million a year to pay off over 25 years. Neilson explains that the investment in this construction forms part of what then can create the R44-million a year income for the City from the stadium from the Western Province Rugby anchor tenant deal.

"One has to look at the total package of the rugby deal. That is how we made it viable for both parties. By building the suites we are also making the stadium more viable for a wider range of uses," he says. Thus, the return on this investment will be even higher than achieved by the Western Province Rugby deal alone.

Part of the total package of the rugby deal is also the renaming of the stadium. It involves a 4-year agreement with DHL.

"All of these things form part of the commercialisation package and the rugby deal is just a part of it, with them forming the primary tenant, giving them priority booking rights, but also the responsibility to host all their games at the Cape Town Stadium."

All other events will still be welcome at the stadium, including sports such as soccer and music concerts.

We live in a world where facts and fiction get blurred
In times of uncertainty you need journalism you can trust. For 14 free days, you can have access to a world of in-depth analyses, investigative journalism, top opinions and a range of features. Journalism strengthens democracy. Invest in the future today. Thereafter you will be billed R75 per month. You can cancel anytime and if you cancel within 14 days you won't be billed.
Subscribe to News24
Related Links
Cape Town’s ailing world cup soccer stadium switches to rugby
Western Cape works on plan B to keep business events industry in demand
2020 meant to be bumper year for SA business events, laments tourism boss
Next on Fin24
Lesotho airline wants to start scheduled flights by September next year