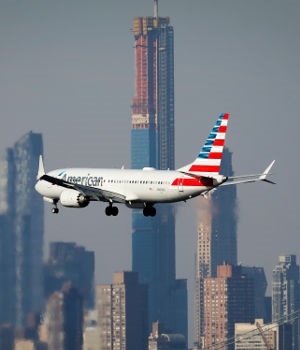 At least two airlines have conducted inspections on the grounded Boeing 737 Max over concerns about an issue that could damage some engine parts, people familiar with the matter have said.

The possible buildup of carbon around fuel nozzles prompted manufacturer CFM International to recommend that some operators examine and potentially replace those components of the Leap-1B models used on the Max, said the people, who asked not to be named because they weren’t authorised to discuss the matter.

American Airlines and Southwest Airlines, the two biggest US operators of the new jet, have each been affected.

While only a small fraction of the engines have been impacted, the checks add to the challenges for operators of the 737 Max, Boeing’s top-selling model and a workhorse of the global aviation fleet. The plane has been grounded for more than a month after two fatal crashes that killed a total of 346 people. The engine issue isn’t related to those disasters.

American confirmed Wednesday that CFM asked it to conduct borescope inspections on three Max engines - a precautionary measure that revealed no problems. That came after CFM recommended Southwest examine a dozen engines. The results were forwarded to the engine maker, and Southwest hasn’t said whether it found any issues.

Southwest is the largest US operator of the Max, with 34 of the planes, while American flies 24. United Continental Holdings didn’t immediately comment on whether it had been asked to inspect engines on its 14 Max aircraft.

CFM, a joint venture of General Electric and Safran SA, hasn’t issued any directives for the full Max fleet, according to a statement that didn’t address the nozzles. The manufacturer said it’s working with customers during the grounding to make sure the engines are ready for a smooth return to service once the Max is cleared to fly.

The carbon buildup, known as coking, can lead to engine damage if left unaddressed. It’s being investigated as a possible factor in an engine malfunction that forced a Southwest Max to make an emergency landing last month, one of the people said. The plane was able to return to the airport in Orlando, Florida, shortly after taking off.

The jet was headed to Victorville, California, for storage and had no passengers. It’s too early to determine the cause of that incident, Southwest said.

Operators of the Max have been notified of the issue, which was discovered more than a year ago, the person said. Inspections are happening on a case-by-case basis determined by engine data, the person said, and some fuel nozzles affected by the buildup have been swapped out. The issue has affected less than 1% of the total fleet of Leap engines, the person said.

Max aircraft were grounded worldwide following the crashes of an Ethiopian Airlines plane in March, the second disaster in five months involving Boeing’s best-selling jet, which debuted less than two years ago. In both cases, a stall-prevention system caused the planes’ noses to lower, confusing the pilots.

Boeing is crafting a software upgrade that would make the system less aggressive and prevent it from making the repeated nose-down commands seen in the crashes. In addition, the system would no longer be triggered by a single erroneous sensor reading.

A board of pilot experts appointed by the US Federal Aviation Administration on Tuesday concluded that pilots won’t need additional simulator training once the plane is returned to service. By contrast, Canada’s transport minister said he favored requiring new simulator training for pilots.

We live in a world where facts and fiction get blurred
In times of uncertainty you need journalism you can trust. For only R75 per month, you have access to a world of in-depth analyses, investigative journalism, top opinions and a range of features. Journalism strengthens democracy. Invest in the future today.
Subscribe to News24
Related Links
Trump offers Boeing some advice: Choose a new name for 737 Max
WATCH: Boeing orders down by almost half
OPINION: Now is not the time for a Boeing-Airbus trade row
Next on Fin24
Why SA farmers are battling a fertiliser price crunch

See all newsletters
Voting Booth
Facebook is facing a fresh crisis after a former employee turned whistle-blower leaked internal company research . Do you still use Facebook?
Please select an option Oops! Something went wrong, please try again later.
Yes, the benefits outweigh the risk for me
25% - 229 votes
No, I have deleted it
46% - 424 votes
Yes, but I am considering deleting it
29% - 265 votes
Previous Results
Covid-19 Money Hub
Covid-19 Money Hub - answering your business and money questions during the crisis