As African leaders meet on growth, SA and Nigeria are a drag 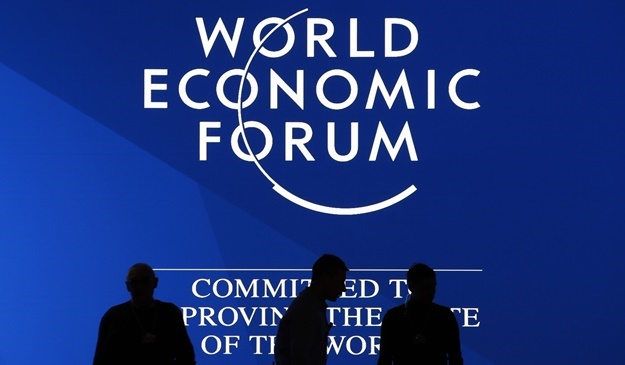 A WEF logo stands on the wall of a session hall inside the Congress Center, the venue for the World Economic Forum (WEF), in Davos, Switzerland, on Sunday, Jan. 20, 2019. World leaders, influential executives, bankers and policy makers attend the 49th annual meeting of the World Economic Forum in Davos from Jan. 22 - 25. Photographer: Stefan Wermuth/Bloomberg

The two nations that account for almost half of sub-Saharan Africa’s gross domestic product are proving to be a damper on the region’s economic expansion.

Nigeria and South Africa, which view with each other to be the continent’s biggest economy, both release second-quarter growth data on Tuesday. While the figures will probably show South Africa dodged a recession and Nigeria’s growth quickened, according to two separate Bloomberg surveys, both are expected to show they expanded at a limp pace.

The publication of the data comes as political and business leaders from at least 28 African countries prepare to meet in Cape Town on Wednesday at the World Economic Forum on Africa. The discussions will focus on how Africa, which has some of the world’s fastest-growing economies in Ghana and Ethiopia, can expand its potential.

“It is obviously going to be a major drag on the continent’s growth if the two largest economies are not performing,” said Ronak Gopaldas, a director at the Cape Town-based consultancy Signal Risk.

The data is expected to show the South African economy grew an annualized 2.5% from the first quarter, and Nigeria’s expanded by the same margin year-on-year. While the slowing global expansion is contributing to South Africa and Nigeria’s tepid growth, the two nations’ economic woes are largely of their own doing.

The ANC-led government in South Africa has failed to decisively deal with the finances of debt-laden power utility Eskom, which is straining the nation’s budget and caused a contraction in GDP in the first quarter. Nigeria’s failure to diversify its economy, which relies on oil for 90% of its foreign exchange, leaves it vulnerable to international price movements.

“Investor confidence and sentiment toward both of these economies is weak at the moment and that’s largely self-inflicted,” said Gopaldas. “Both countries, through their policy-making own goals, have made bad situations worse than they needed to be.”

South African President Cyril Ramaphosa is facing criticism from business and investors for the slow implementation of reforms, while proposals published by the National Treasury last week to revive the economy have been shot down by the country’s biggest labour-union federation.

Similarly, a lack of policy progress since Nigerian President Muhammadu Buhari was re-elected in February has frustrated investors in Nigeria and the recent blurring of lines between monetary and fiscal policy to stabilize the naira added to that, said Celeste Fauconnier, an analyst at Johannesburg-based Rand Merchant Bank, a unit of FirstRand.

Among the solutions likely to be touted at the WEF as a panacea for accelerated growth is the African Continental Free Trade Area. An accord on the area, signed in July, will cover the entire continent and will be the world’s largest free-trade zone once it’s fully operational.

“South Africa stands to benefit far more from the African Continental Free Trade Area,” Finance Minister Tito Mboweni told reporters on Monday. “We stand to gain tremendously from this because of our industrial base.”

“Nigeria and South Africa will likely struggle to revamp their traditional leadership roles on the continent, due to the weakness of their domestic economies and policies focused on supporting national rather than regional development. The WEF is a discussion meeting rather than a decision-making one, like the African Union. The outlined topics, such as innovation, digitization, sustainable development and leadership, are more relevant for the more developed countries on the continent, such as South Africa.”