Zim says exchange rate to strengthen, thanks to 'new currency' 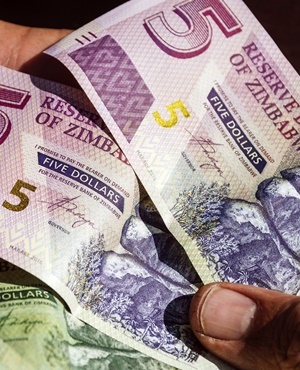 Zimbabwe’s government expects the exchange rate of what is in effect a new currency to strengthen from its current black market level when it starts trading. The political opposition isn’t so sure.

On Wednesday, central bank Governor John Mangudya said the government will no longer insist that quasi-currencies known as bond notes and RTGS dollars, an electronic equivalent, are worth the same as real US dollars. They will be merged and allowed to trade freely in an inter-bank market.

Those instruments were trading at between 3.66 and 3.80 to the dollar before the announcement, according to marketwatch.co.zw, a website run by financial analysts.

“The market has been clamoring for its introduction. This is a measure that removes most of the distortions that were impacting the market,” said George Guvamatanga, the permanent secretary in the Finance Ministry. “The market will determine the rate. You could call it a float.”

The measures come as the government scrambles to end a currency shortage that’s pushed inflation to the highest rate since 2008 and sparked shortages of fuel and bread. The troubles stem back to the country abandoning the Zimbabwe dollar in 2009, after a bout of hyperinflation, in favor of the US greenback. In 2016, it introduced the bond notes, which aren’t accepted outside the country.

The official inflation rate has soared to 57% from less than 4% a year ago. Steve H. Hanke, a professor of applied economics at the Johns Hopkins University in Baltimore, calculates it to be even higher, at 269%.

“We are expecting the rate on the alternative market will come down,” Guvamatanga said. “The models we have worked on have shown a lower side of 1.86 and a higher end of 2.53.”

He said the models were based on purchasing power parity.

“It’s insanity,” said Tendai Biti, a senior party leader and former finance minister. “They have through the back door reintroduced the Zimbabwe dollar.”

He said the country’s fundamentals won’t support a new currency because there are no reserves to back it up, no market confidence and no macroeconomic stability. Biti estimates that the RTGS dollar will trade at between six and eight to the US dollar.

The central bank will probably have to supply plenty of real dollars to keep the next exchange rate stable, according to NKC African Economics, based in Paarl, South Africa.

“To anchor price stability, the Reserve Bank will aggressively intervene in the liquidity market,” Jee-A van der Linde, an economist at NKC, said in a note to clients. “The fact that officials finally came to their senses and ditched the notion that Zimbabwe’s quasi-currency was at par with the US dollar, is comforting.”

We live in a world where facts and fiction get blurred
In times of uncertainty you need journalism you can trust. For 14 free days, you can have access to a world of in-depth analyses, investigative journalism, top opinions and a range of features. Journalism strengthens democracy. Invest in the future today. Thereafter you will be billed R75 per month. You can cancel anytime and if you cancel within 14 days you won't be billed.
Subscribe to News24
Related Links
Zimbabwe's inflation rate is being misread, Ncube says
Zimbabwe central bank is said to consider devaluing bond notes
Zim biggest gold miner suspends operations as central bank fails to pay up
Next on Business
Zimbabwe will keep world's highest interest rates into 2023