As it happened: 'I see the disappointment and anger in people’s eyes' - McKinsey McKinsey ashamed to be associated with state capture

David Fine, McKinsey senior partner, told Parliament on Wednesday that he and his company are ashamed to be associated with state capture.

He was giving evidence in front of the portfolio committee on public enterprises, which is currently investigating state capture allegations at Eskom.

“Mr Sagar did not disclose any information about Salim Essa or their relationship.”

Fine added that he acted “with great strength” when this information emerged.

“I took a risk internally to raise these concerns.”

He also emphasised that he does not know Mark Pamensky, Salim Essa or Kuben Moodley – all names associated with the Gupta family and the state capture project.

Fine lastly appealed to Parliament to not “punish” the young black South Africans working at McKinsey.

“If you want to punish someone, punish me, not these young people who can bring skills and capabilities to South Africa.”

He stressed that McKinsey will pay back the R1bn it received from Eskom – even if a court finds that it was legal.

“We don’t want tainted money. Please help us to resolve this,” Fine said.

David Fine is pictured below. How is it that global companies like McKinsey have no leadership figure in South Africa taking responsibility for alleged involvement in state capture, asked ANC MP Pravin Gordhan on Wednesday.

Gordhan is a member of the public enterprises portfolio committee conducting an inquiry into state capture allegations at Eskom.

Gordhan was posing this question to McKinsey senior partner David Fine, who was testifying before the inquiry.

“Why is there this tendency for international senior people to not come here, face the South African public and apologise,” Gordhan asked. “Is this because they’re shy or arrogant?”

Fine responded, saying “many of his colleagues” have spent time in South Africa recently.

“We take this matter seriously, but it is also part of a political debate and narrative. We’re not in the press or comfortable being in the press,” Fine said.

“We’re inexperienced in a situation like this. It’s a very difficult situation. The extent of discussion and debate is very deep and very wide.”

Fine said McKinsey is “getting mixed together” with a number of allegations, yet it has never worked for a Gupta company.

“We were not involved in moving money and auditing webs. This is terribly embarrassing to us.” ANC chief whip defends Eskom inquiry, says it will be fair and transparent

The office of ANC chief whip Jackson Mthembu has defended the Public Enterprises Committee’s inquiry into claims of state capture at Eskom.

“The office of the ANC Chief Whip notes concerns from various individuals on the fairness of the parliamentary inquiry into Eskom which is currently underway.

“These concerns arise from the claim that there have been allegations levelled against the concerned parties in the inquiry while they have not been afforded an opportunity to respond.

“We have been assured by the committee on Public Enterprises that all individuals mentioned, accused or implicated by any testimony during the inquiry will be afforded an opportunity to tell their side of the story. In fact, the committee is already communicating with various parties inviting them to appear before the inquiry.

Luyenge earlier said the “the attacks on the evidence leader of the inquiry are unwarranted, misplaced, unfair and must be condemned”.

“As the evidence leader, Advocate Mthuthuzeli Vanara is acting at the behest of the committee and is doing work he has been tasked with as an employee of the institution,” the office of the ANC chief whip said.

“The singling out of a parliamentary employee who is acting on behalf of a committee goes against the grain of parliament’s oversight role.

“Our objective as parliament through this inquiry is to unearth any wrong doing at our public entity and to ensure that those implicated are held accountable. We therefore encourage anyone with information which could assist the inquiry to come forward.”

Parliamentary sources told Fin24 that Public Enterprises Minister Lynne Brown and Deputy Minister Ben Martins will be among those who will get a chance to testify next week.

Martins called the inquiry unfair, while Brown called for the inquiry to allow those accused to provide their version of the story. David Fine, McKinsey senior partner, said he had received an invitation to the Gupta wedding, but declined to go.

Giving evidence before Parliament’s portfolio committee on public enterprises tasked with an inquiry into state capture allegations at Eskom, Fine was asked about his relationship with the Gupta family.

“I received an invitation – a big box full of jars. But I left the South African office at the time. I didn’t go. And I never met them.”

Fine said he started acting as soon as he realised that McKinsey’s hard-earned reputation in South Africa was at stake on the back of damning media reports about Gupta associated Salim Essa and the way in which it could affect McKinsey’s name.

“I got anxious and emotional and went into a super investigation,” Fine said.

The below image is a cover of You magazine, revealing the Gupta wedding spectacle. Eskom Inquiry: McKinsey on paying back the money

McKinsey has no objection to paying back the R1bn it earned from work done for Eskom, said David Fine, senior partner at the consultancy firm.

Fine was asked what is stopping McKinsey from paying back the money allegedly earned unlawfully.

In October this year, Eskom said in a statement it had sought the cooperation of McKinsey and Gupta-linked Trillian in returning R1bn and R564m respectively “which appears to have been unlawfully paid out in 2016 and 2017”.

Eskom said the interim findings from investigations into the circumstances surrounding payments made to both the companies, point to certain decisions by Eskom, and resultant payments, as being unlawful.

“We’re awaiting confirmation – do we pay the money to Eskom or South African citizens?”

Fine said. He added that McKinsey has “reserved” the funds and that it is eager to resolve the impasse.

“Who should receive the money, and how should it be delivered?”

McKinsey admits it should have done better due diligence on Trillian

McKinsey senior partner David Fine told Parliament on Wednesday admitted that it should have done more thorough due diligence before engaging the services of Trillian Capital.

Giving evidence before the portfolio committee on public enterprises, tasked with an inquiry into state capture allegations at Eskom, Fine said McKinsey had initially “got comfort” from Google searches into Regiments.

Fine admitted that more thorough due diligence should have been done beforehand. “But at the time state-owned enterprises were not part of our risk policies.”

Fine also said McKinsey apologised to Adv Geoff Budlender for not cooperating with his investigation done on behalf of Trillian.

“His investigation was done on behalf of Trillian. But it caused consternation about how we should cooperate without jeopardising the confidentiality of our clients,” Fine said.

“But we should have met with Adv Budlender. I am embarrassed we did not and we apologised for the way we worked with him.” Fine is currently giving evidence at an inquiry into state capture allegations at Eskom. He admitted that McKinsey’s relationship with Regiments was not straightforward.

Matters initially improved and the quality of Regiments’ modelling skills were good and complimentary to the work McKinsey did, Fine said.

In mid-2016 McKinsey noticed there was a deterioration in the quality of work done by Regiments and they failed to meet commitments.

“We met with Eric Wood (who headed up Regiments) to talk about their performance,” Fine said.

Another challenge was media reports surfacing that people such as former Regiments principal Mohamed Bobat had improper relationships with the Gupta family. 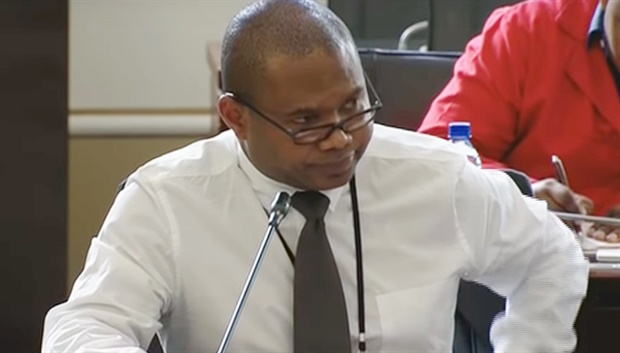 Members of the Public Enterprises Committee on Wednesday called for a motion of confidence in adv Ntuthuzelo Vanara who is currently the evidence leader of Parliament’s inquiry into state capture at Eskom.

Zukile Luyenge (ANC) said he was perturbed about the attacks on Vanara during the previous day’s events. This follows after Public Enterprises Minister Lynne Brown and her deputy Ben Martins raised concerns about the manner in which the inquiry is being conducted. Next week has been set aside for those accused of state capture, a Parliamentary source speaking on condition of anonymity told Fin24. He said the above individuals – which would likely include acting Eskom board chairperson Zethembe Khoza – would likely appear.

Eskom spokesperson Khulu Phasiwe told Fin24 on Wednesday that he could not confirm the news.

“However, the portfolio committee has indicated that they would ask Eskom leadership to give evidence soon,” he said.

“The committee says it can't disclose the names of witnesses for security reasons.”

Martins said in a statement on Tuesday that the inquiry had been unfair to those accused of state capture.

He was accused of being at a meeting with the Guptas, where they allegedly surprised suspended Eskom head of legal Suzanne Daniels with a request to delay proceedings against Molefe.

Brown said in a separate statement on Tuesday that the inquiry should give an opportunity to those accused to state their positions at the inquiry.

“Unless the Parliamentary inquiry into allegations of malfeasance at state-owned companies gives those who have been accused of wrongdoing the opportunity to explain their actions it will serve no higher function than advancing political agendas and further undermining the economy,” she said.

Brown, who was accused by Eskom board spokesperson Khulani Qoma of being capture by the Guptas and lying about her knowledge of Trillian, pledged to act.

“If truth be told, Eskom officials intentionally misled me on the Trillian matter and the acting chairperson has assured me that those responsible will be charged by the company,” Brown said.

Go to top
We live in a world where facts and fiction get blurred
In times of uncertainty you need journalism you can trust. For only R75 per month, you have access to a world of in-depth analyses, investigative journalism, top opinions and a range of features. Journalism strengthens democracy. Invest in the future today.
Subscribe to News24
Related Links
‘Brown is the problem at Eskom’ – Khulani Qoma
Next on Fin24
Find your load shedding schedule