Emerging markets tested by rising dollar ahead of Biden's return

A stronger U.S. dollar is proving to be an early test for emerging-market currencies on the eve of Joe Biden’s inauguration.

The greenback gained over the last two weeks, buoyed by the president-elect’s proposal for a $1.9 trillion stimulus package. Most developing-nation currencies have slumped in that span, and history suggests further pain may be in store.

MSCI Inc.’s gauge of emerging-market currencies ended 2020 with its biggest quarterly advance in a decade as optimism over the distribution of Covid-19 vaccines bolstered risk appetite. Now, the backdrop of rising cases, renewed lockdowns and vaccine concerns threatens to reverse those flows. 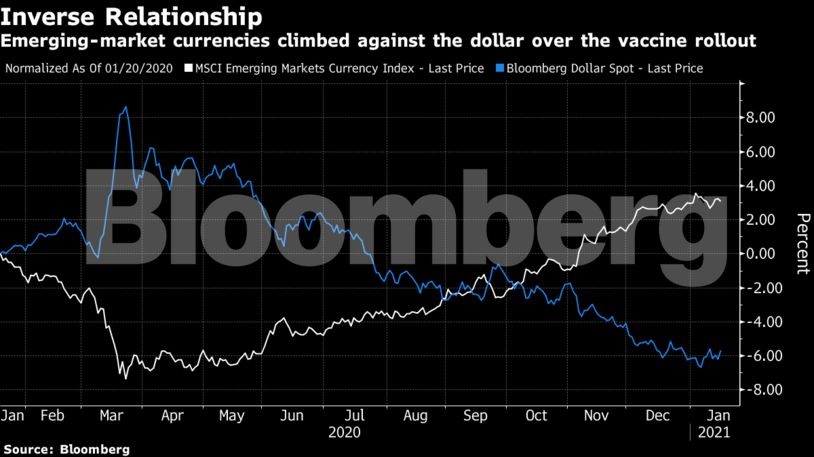 “If vaccines prove less effective than we expect and [the] global economy stumbles, the ‘safe haven’ dollar would likely appreciate,” Goldman Sachs Group Inc. strategists including Zach Pandl wrote in a report.

Still, the strategists “expect broad dollar weakness” this year as exposures to risk assets and upside in commodity prices can outweigh the potential drag from higher U.S. rates.

One currency of interest to investors is the Turkish lira, which has climbed since hitting a record low in November. On Thursday, the central bank is expected to keep the nation’s one-week repo rate at 17%.

“The lira has rallied and reserves are stabilizing, providing no reason to raise rates further,” according to Bloomberg Economics. “Still, inflation accelerated in December, limiting the scope for rate cuts.”

Policy makers in Malaysia, South Africa and Brazil will also decide on their borrowing costs this week.

Meantime, Biden’s return to the White House on Wednesday will carry particular significance for traders who follow relations between the world’s two largest economies. On Friday, the Trump administration announced it would sanction six officials from China and Hong Kong in a parting shot to Beijing.

Turkey’s central bank will probably leave its benchmark rate unchanged, according to the median estimate of 21 economists surveyed by Bloomberg

Two economists predict an increase of 50 basis points, while two forecast a hike by a percentage point

The Monetary Policy Committee led by Governor Naci Agbal boosted the one-week repo rate to 17% from 15% last month, bolstering credibility with investors after he pledged to tighten policy when needed to keep prices in check

South Africa’s central bank will probably leave its policy rate on hold at 3.5% on Thursday, according to 15 out of 16 economists in a Bloomberg survey

One predicted a reduction by 25 basis points

The second wave of the coronavirus pandemic, renewed lockdown restrictions and the return of power cuts will likely stall a recovery in an economy that contracted 8% in 2020, according to central bank forecasts. Even so, the central bank signaled at its previous policy meeting that it’s reluctant to lower borrowing costs further after cutting the repurchase rate five times last year by a total of three percentage points

Bank Negara Malaysia is expected to keep its benchmark rate on hold Wednesday, according to a median estimate of economists surveyed by Bloomberg

Bloomberg Economics argues that the central bank can afford to stand pat after 125 basis points of easing last year. Oil prices are also recovering, and Malaysia’s key trading partner, China, remains on the mend, it said

Still, some economists in the Bloomberg survey expect a 25-basis-point cut, in part because of Malaysia’s persistently low inflation readings

The rate decision comes after Malaysia’s king declared a nationwide state of emergency for the first time in more than half a century, suspending parliament in a move that allows embattled Prime Minister Muhyiddin Yassin to avoid facing an election until the pandemic is over.

The central bank didn’t signal that more cuts were imminent at its previous meeting in December, and may be concerned about the risk of higher U.S. yields putting the rupiah under pressure

One economist in a Bloomberg survey expects a 25 basis-point cut, perhaps because inflation has remained below target for seven months straight

China’s one-year loan prime rate -- the reference rate for bank loans to companies -- will likely remain at 3.85% in January, according to Bloomberg Economics.

Brazil’s central bank is expected to hold the key rate at an all-time low on Wednesday, while traders look for signs of more hawkish language after policy makers warned that inflation pressures could persist into the new year.

A slew of economic data from China due Monday will be scrutinized given its importance for the global recovery and the Chinese outperformance narrative. The country reports fourth-quarter GDP and industrial production, retail sales and fixed assets investment data.

Optimism over China’s recovery path might be fractionally dented after the poor credit growth numbers last week and disappointing PMIs for December.

December currency settlement data from SAFE are due on Friday. This was previously scheduled for last week. It will be interesting to see if the hitherto low exporter-conversion rates have started to increase, as one would expect given the yuan’s steady trend of appreciation in second half 2020.

Ongoing Chinese official resistance to appreciation will also be monitored by traders after higher than expected yuan fixes and reports of state banks buying dollars.

Taiwanese export orders for December are expected to show a further 27% year-over-year increase on Wednesday.

South Korea’s 20-day January export data are due on Thursday.

These figures will likely highlight continued resilience in external demand at the start of 2021.

The Korean won was the worst-performing currency in emerging Asia last week as higher U.S. yields caused a pull-back in Asia’s strongest currency in second half 2020.

That said, a Bloomberg study suggests that the won should be relatively impervious unless the increase in U.S. yields picks up.

South Africa’s CPI inflation rate probably fell to 3.1% in December, from 3.2% the previous month, a report may show Wednesday, according to the median forecast in a Bloomberg survey.

On Tuesday, Russia’s central bank may publish preliminary 4Q data on the current-account balance, while the federal statistics service releases its consumer confidence index for the same quarter.

The Finance Ministry may report its December budget balance data on Wednesday or Thursday.

Inflation in Poland probably slowed in December to 3.7% from 4.3%, a report may show Monday, according to the median estimate in a Bloomberg survey.

That would give the central bank room to reduce borrowing costs as it tries to weaken the zloty.

Mexican unemployment data, to be released on Thursday, will be monitored for signs of how high Covid infection rates are impacting jobs.

Inflation for the first half of January, meantime, will probably be relatively stable, according to Bloomberg Economics.

We live in a world where facts and fiction get blurred
In times of uncertainty you need journalism you can trust. For only R75 per month, you have access to a world of in-depth analyses, investigative journalism, top opinions and a range of features. Journalism strengthens democracy. Invest in the future today.
Subscribe to News24
Related Links
Big Biden stimulus no balm for US stocks, Dow loses 0.6%
Markets struggle after Biden unveils huge stimulus plan
Hong Kong stocks close higher
Next on Fin24
Covid-19 antibody drug 80 times more potent than Trump’s tested in Italy

See all newsletters
Voting Booth
Have you claimed the interest on your rental deposit?
Please select an option Oops! Something went wrong, please try again later.
Yes, and I've gotten it.
21% - 1065 votes
No, I did not.
52% - 2681 votes
My landlord refused
28% - 1445 votes
Previous Results
Covid-19 Money Hub
Covid-19 Money Hub - answering your business and money questions during the crisis