The pound extended its decline to a two-month low as investors fretted over the possibility of a new lockdown in Britain.

The currency dropped as much as 0.5% to $1.2676 after Foreign Secretary Dominic Raab said that he can’t rule out a nationwide shutdown before trading little changed. Government bonds advanced, sending the yield across tenors down about one basis point.

On Tuesday, Prime Minister Boris Johnson set new rules to curb the rise in coronavirus cases, including a 10 p.m. closing time for pubs and restaurants and a recommendation for office workers to work from home if they can.

These announcements don’t “inspire confidence in UK services or the economic outlook,” said Kenneth Broux, a strategist at Societe Generale SA in London. Strength in the dollar and short covering are another contributing factor to the pound’s weakness following hawkish comments from Chicago Fed President Charles Evans. The dollar is enjoying broad support from risk-averse bias in foreign-exchange markets.

The new UK restrictions have put an abrupt end to the government’s drive to open its economy and revive growth. The first nationwide lockdown that shuttered social and commercial activity in March triggered the UK’s worst recession in more than a century. But infection numbers have been spiking after the summer holidays, with daily confirmed cases around 4 000 over the past week.

And in a sign that Brexit risks are back to haunt the pound, JPMorgan Chase & Co. is moving about €200 billion in assets from the UK to Frankfurt as international banks beef up their operations in the EU.

The pound’s fall could’ve been worse. Demand from speculative investors within the $1.2680 to $1.2700 range in sterling absorbed the first wave of selling by algorithms, according to a Europe-based trader familiar with the transactions, who isn’t authorized to speak publicly and asked not to be identified.

Still, the risks are adding up. The restrictions unveiled by Johnson - combined with the withdrawal of some fiscal stimulus and risks of a messy exit from the European Union when the transition period ends - mean there could be no economic growth in either the fourth quarter or the first three months of next year, according to Bank of America Global Research.

And if the government opts for a two-week shutdown of the UK hospitality sector, it may knock at least 2% off the nation’s gross domestic product and trigger further stimulus from the Treasury and Bank of England, according to JPMorgan. IHS Markit’s flash composite Purchasing Managers Index slipped to 55.7 in September from 59.1 a month earlier, a sign the nation’s consumer-led rebound is running out of steam.

Raab was “doing his best to sink the pound,” said Valentin Marinov, the head of Group-of-10 foreign exchange strategy at Credit Agricole.

We live in a world where facts and fiction get blurred
In times of uncertainty you need journalism you can trust. For only R75 per month, you have access to a world of in-depth analyses, investigative journalism, top opinions and a range of features. Journalism strengthens democracy. Invest in the future today.
Subscribe to News24
Related Links
Johnson tells UK to work at home for 6 months as virus spreads
WATCH | UK to 'put brakes on' reopening as virus cases rise
WATCH | Around 695 000 UK jobs lost since March as unemployment rises
Next on Fin24
WeWork’s new CEO is eyeing an IPO again - after he turns profit 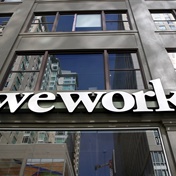