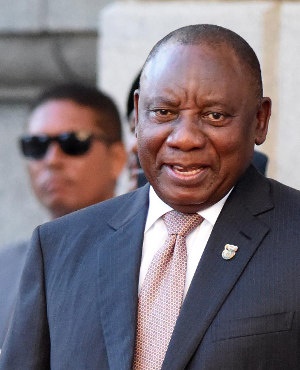 By lunch-time every day, the US invests in venture capital what South Africa does in a year.

Last year, the US invested $82bn in venture capital into new businesses; the total in South Africa was $70m.

Ketso Gordhan, the CEO of the SA SME Fund, which was launched earlier today by President Cyril Ramaphosa, wants to change the picture.

The R1.4bn fund is jointly capitalised by the Public Investment Corporation and 50 companies. The plan is to use it to generate a venture capital movement, the absence of which hobbles many entrepreneurs with big ideas but small money.

Conceptualised at the end of 2015 when South Africa faced an investment rating downgrade (as it does this week), Gordhan and his six-person team have spent the past six months finding largely black-owned, future-facing businesses in the technology and biotechnology sectors to invest in.

The SA-SME fund is a fund-of-funds in that it invests in three venture capital companies with an established history of investing in the kinds of companies it is targeting. The three are Knife Capital, 4DI and Savant.

“We will create and help grow black entrepreneurs. There is a clear transformation target: 50% of funding must go to black African South African-owned businesses. Twenty-five per cent goes to broad black (Indian and coloured entrepreneurs) while the rest is discretionary,” says Gordhan who is himself a venture capitalist with investments in 20 businesses largely in education.

Gordhan is a former director-general and Johannesburg city manager; he also worked as a senior director at RMB. He defines venture capital as “Investing (in) an untested business model behind people with a track record.”

While the US is still the world’s leader in venture capital markets, Gordhan says Israel provides a good example of how a small country can make big strides, specifically in tech businesses.

“The second largest number of companies listed on NASDAQ come from Israel; they beat everyone else and that’s from a country of just seven million people. While we have other problems (linked to Israel’s human rights violations of Palestinian people) with them, it’s one area which is an amazing story,” says Gordhan.

The Israel government matches venture capital investments; the South African government was supposed to match the R1.4bn raised by the SA SME Fund, but the constrained fiscus did not allow it.

A third leg of the fund’s work is to work with universities to turn the results of PhD research and innovation into business models. “The universities produce the largest amount of intellectual property in the country. The government spends R10bn a year on research and we are really good at converting this into PhDs and journal articles. But we are really bad at converting it into commercially viable business ideas,” says Gordhan.

The SA SME fund will set up a private equity fund that collaborates with universities and researchers to generate business ideas. The model is Oxford University where the Oxford Sciences which has attracted 600m pounds to commercialise research into businesses.

The SA SME Fund has an all-star cast of directors including Wits University chancellor and business leader Judy Dlamini; the Eskom chairperson Jabu Mabuza and the Discovery CEO Adrian Gore. The serial entrepreneur and venture capitalist Michael Jordaan is head of its investment committee – he has independently invested in 30 businesses since stepping down as FNB CEO.

* Correction: A previous version of this article incorrectly stated that the SA SME fund had invested in mobile-phone credit card payment system Yoco. See all newsletters
Voting Booth
Do you think it was a good idea for the government to approach the IMF for a $4.3 billion loan to fight Covid-19?
Please select an option Oops! Something went wrong, please try again later.
Yes. We need the money.
11% - 1009 votes
It depends on how the funds are used.
74% - 6759 votes
No. We should have gotten the loan elsewhere.
15% - 1424 votes
Previous Results
Covid-19 Money Hub
Covid-19 Money Hub - answering your business and money questions during the crisis