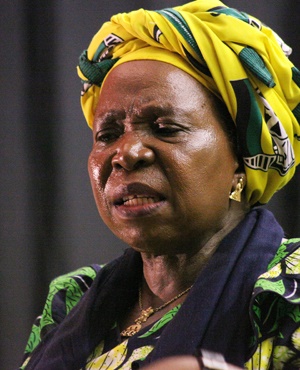 Johannesburg - Retaining the economic status quo which has left over half of South Africans living in poverty will threaten the country's peace and stability, African National Congress presidential hopeful Nkosazana Dlamini-Zuma warned on Tuesday.

"If we keep increasing unemployed youth, who are becoming angry and frustrated, and keep increasing poverty levels that add to frustration, the levels of stability of our country and the ability of business to do business in a calm atmosphere will be compromised," she said during a discussion about her economic policy, at the Gordon Institute of Business Science.

In her campaign message, she calls for radical changes in economic policy. It includes land redistribution and increasing black participation in the economy.

She faced tough questions from an audience dominated by private sector employees. They accused the ANC government of failing to maintain investor confidence because of policy uncertainty.

She said she was open to consultations and was not a "person of surprises". Her tenure in government showed that she had always acted in consultation with the private sector, including tobacco and pharmaceutical companies. She was health minister from 1994 to 1999 under then-president Nelson Mandela.

"Sometimes they resisted, but no one can say there were surprises."

Earlier, she challenged business on its reluctance to invest in the economy. "Patriotic business" would want to change the status quo to end deepening poverty, inequality and unemployment.

She was asked about state-owned entities buckling under maladministration. They had a role to play in growing the economy, but had to be properly governed and have boards that took their fiduciary responsibilities seriously, she said.

She refused to comment on Finance Minister Malusi Gigaba’s proposal for government to sell its multi-billion rand stake in Telkom to give South African Airways yet another bail-out, this time to the tune of R10bn. Dlamini-Zuma said she had not seen the details of the proposal.

"Before a bail-out, you must know what is the mischief you are trying to fix. I assume government knows, because it is not the first time SAA is being bailed out."

If elected ANC president, she wanted her legacy to be a skills revolution which matches the country's economic needs. The education system should be transformed to include training at schools to produce artisans.

"Education is and skills are the fastest equalisers," she said.