Mantashe: Africa should push harder for oil and gas investment Minister of Mineral Resources and Energy Gwede Mantashe has said the African continent receives disproportionately low returns for its natural oil and gas endowments and should work to attract strategic investment in this area with single-minded purpose.

Mantashe was speaking at the Africa Oil and Power Conference in Cape Town on Thursday morning. The minister showed strong support for mega energy projects across the continent, highlighting Africa’s lack of development compared to other regions as a reason to keep going.

Mantashe said Africa was endowed with fossil fuels the continent could not stop using abruptly. He said this did not mean that African leaders and investors were denialists when it comes to climate change, but that they subscribed to "a just transition" towards cleaner forms of energy.

Mantashe said Africa as a region needed to attract investment in refining hubs throughout the continent, as it already had the natural resources it needed to capitalise off the sub-sector.

Mantashe said Africa needed to attract investment in refining hubs throughout the continent, like the large refinery complex under construction in Nigeria. The Dangote refinery in Lagos, currently due for completion in 2020, is set to be Africa's biggest.

"We should welcome that. In South Africa we are working closely with Saudi Aramco to conclude a feasibility study into a crude oil refinery and associated petrochemical plants," Mantashe said. 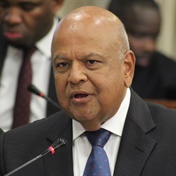