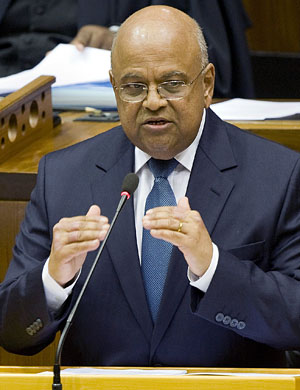 Johannesburg - In naming his second finance minister in the space of a week, President Jacob Zuma has chosen an experienced hand well-known to foreign investors.

Pravin Gordhan, aged 66, will retake the role he held between 2009 and 2014, replacing obscure lawmaker David van Rooyen, whose appointment on December 9 sent the rand to a record low against the dollar.

Zuma’s U-turn sees the return of a finance minister who in 2009 steered the economy through the first recession in 17 years, while fending off pressure from labour unions to increase spending in the face of a widening budget deficit.

While his reputation for fiscal prudence may stabilise markets in the short term, his real challenge is one he can’t fix: his boss’s growing reputation for incompetence, said Gary van Staden, an analyst at NKC African Economics.

Gordhan “will likely achieve some success in calming the collective nerve, but the longer-term consequences of presidential blundering and Mr Zuma’s thoughtlessness and knee- jerk decision-making will leave its own negative legacy,” Van Staden said in a note.

“The return of Mr Gordhan is likely to have some short-term benefit only in regard to local assets: stocks, bonds and the currency. However, the switcheroo will do nothing to reassure investors and business of the long-term viability of South Africa under the current administration.”

Gordhan retakes the role at a time when output is expected to grow just 1.4% this year, with the economy having narrowly avoided recession in the third quarter and the nation is on the verge of being downgraded to junk status by rating companies.

The rand tumbled to a record 16.05 against the dollar on December 11 after Zuma fired Nhlanhla Nene, who had served 19 months as finance minister, without giving reasons.

The currency rallied as much as 6%, the most since 2008, while yields on benchmark government bonds due December 2026 plummeted 108 basis points from a seven-year high.

“The markets will welcome back Gordhan to National Treasury,” John Cairns, a currency strategist at Rand Merchant Bank, wrote in a note Monday. “He is a known entity, is his own man and did well when in the post previously.”

In his initial stint as finance minister Gordhan stressed the need to curb government spending, telling reporters in April 2014, shortly before he was replaced, that South Africa had to “start consolidating our fiscal position and reducing the amount we have to borrow.” He was moved to the Co-operative Governance Ministry, where he oversaw local councils.

Gordhan graduated as a pharmacist from the University of Durban Westville in 1973 and became involved in politics as a student, helping organise opposition to all-white rule for the ANC and the South African Communist Party. He was detained several times by the police and tortured.

Gordhan played a key role in negotiations between the ANC and the National Party government leading to South Africa’s first democratic elections in 1994. After the ANC took power under Nelson Mandela he was appointed a lawmaker and chairperson of a committee overseeing the implementation of the new constitution.

He joined the South African Revenue Services in 1998 and was tasked with overhauling its customs and revenue administration. The following year he was named head of the agency and served for a decade before heading the National Treasury as finance minister.

He will hold a media briefing at 13:00 in Pretoria on Monday, the Treasury said.

Markets will want to know his views on South African Airways and spending on nuclear energy, said Peter Attard Montalto, an emerging-markets economist at Nomura International in London.

Nene was fired shortly after he clashed with chairperson of SAA, Dudu Myeni, who also heads Zuma’s charitable foundation, when he refused the loss-making national carrier permission to restructure a plane-leasing deal. He also urged caution in proceeding with Zuma’s plan to build nuclear power stations.

“Those issues need to be watched carefully still, even with Pravin back,” Montalto said.

Related Links
Zuma's days are numbered - analysts
Banking index up 15% after Gordhan appointment
Rand, bonds surge as Zuma reappoints Gordhan
Share
Next on Fin24
SA households weren't coping with debt even before lockdown - and it's getting worse

See all newsletters
Voting Booth
How has Covid-19 impacted your financial position?
Please select an option Oops! Something went wrong, please try again later.
I'm not really directly affected
19% - 201 votes
I am taking a hit, but should be able to recover in the next year
26% - 275 votes
My finances have been devastated
29% - 305 votes
It's still too early to know what the full effect will be
26% - 270 votes
Previous Results
Covid-19 Money Hub
Covid-19 Money Hub - answering your business and money questions during the crisis