State, industry fight to save the chicken Johannesburg - As government and chicken farmers met this week to try to save South Africa’s poultry industry, news that better-than-expected rains will bring a predicted 30% drop in feed prices by the middle of the year will give producers some respite.

But while agricultural economists believe the impending drop in soya bean and maize prices after a drought-driven price hike will push up profits for chicken producers, they are still adamant that this will only bring short-term relief and that improved protection from “dumped” chicken is necessary for the industry to stay afloat.

With the crop estimates due to be released on Thursday, agricultural economist Antony Clark said this week that 33% more maize had been planted this season, with crop estimates at 11.5 million tons, a massive improvement on 2016’s 7.6 million tons.

However, with good rains in February and March, which are predicted, this could reach 14 million tons.

Kevin Lovell, CEO of the SA Poultry Association, confirmed that lower maize and soya prices were predicted – an estimated 70% of the cost of raising a chicken for market is feed – from April.

“There will be a drop in the prices of both maize and soya, which have been driven up by the drought, as early as April. This still has to feed through into the feed we buy, so by the middle of the year, prices will start to fall if the rains carry on,” Lovell said. 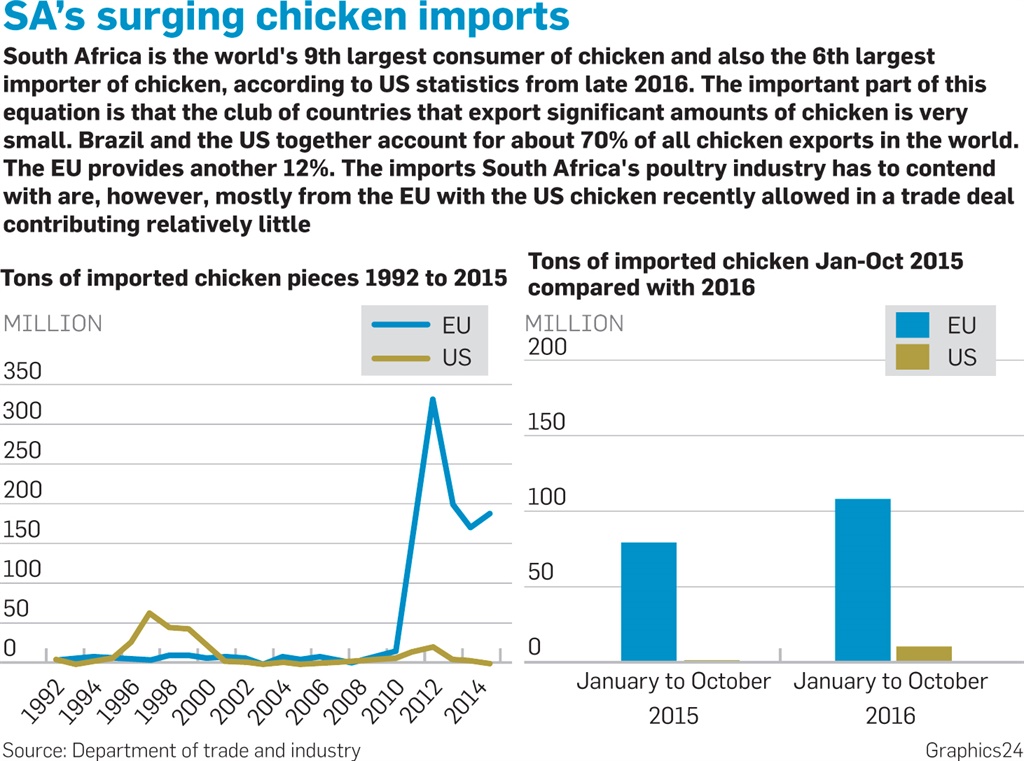 “All this does is that it limits the harm. A drop in feed price doesn’t deal with the unfairness facing the industry,” Lovell said. “Until we stop becoming a waste-disposal site for rubbish from the developed world, we won’t fix our industry.”

Lovell told City Press that the joint committee of industry and government led by the department of trade and industry (the dti) met this week, with both sides putting forward proposals that they believe will help halt the job losses in the industry.

Lovell said a joint team from government and industry would present an action plan within two weeks, which will incorporate the “most effective” proposals from both sides.

Government, he said, now had a “clear understanding” of the challenges the industry faces.

At present, bone-in imported chicken is subjected to a 13.9% tariff, which will stay in place until July, and which was imposed by the SA Revenue Service after approval by Trade and Industry Minister Rob Davies. It is understood that the industry team stuck to its earlier proposal for a 37% tariff on bone-in imported chicken, arguing that the 13.9% was not enough to ensure fair pricing by importers.

Spokesperson for the dti Sidwell Medupe said government would continue to talk to the industry to try to stabilise it and open up international markets for South African chicken exports, particularly in the Middle East.