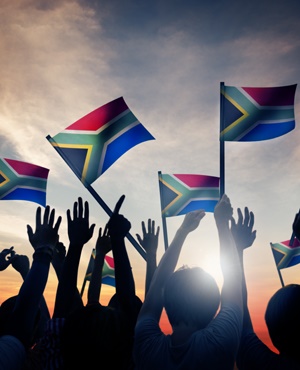 South Africa is gearing up for elections on May 8 that will serve as a referendum on whether the ANC has rehabilitated itself in the eyes of voters after former leader Jacob Zuma’s scandal-marred rule.

The ruling party’s two main challengers are the DA and the EFF, which favours the nationalisation of mines, banks and land.

The ANC, led by President Cyril Ramaphosa, aims to build on the 62% majority it won in the last national elections in 2014. The DA wants to boost its share of the vote to 30%, from 22%, and wrest control of the Gauteng and Northern Cape provinces from the ANC. The EFF is positioning itself as king-maker in provinces where there’s no clear winner, a role it played after 2016 municipal elections that saw the ANC lose control of several key cities. Polls show that both the ANC and the DA are likely to be disappointed.

These are some of the main campaign issues and how the parties plan to tackle them:

The ANC says its commitment to tackling graft is evidenced by the establishment of a commission to probe allegations that Zuma’s allies looted state departments and companies, the appointment of a new chief prosecutor and the creation of a judicial tribunal to speed up the return of stolen money. It plans to ensure there is greater transparency in the awarding of state tenders, and wants to strengthen parliament’s oversight role and crack down on private companies that engage in illegal practices. The DA plans to establish a new anti-corruption unit within the National Prosecuting Authority to investigate politicians and government officials implicated in wrongdoing.

It also wants parliament, rather than the president, to appoint the chief prosecutor and to subject all prosecutors to annual performance assessments. It proposes imposing minimum 15-year jail sentences on state employees who are convicted of embezzling more than R10 000 rand. The EFF favors amending the Constitution to make the National Prosecuting Authority accountable to parliament, rather than the government, to guarantee its independence. Public representatives and state workers who are convicted of corruption should serve minimum 20-year jail sentences and forfeit their pensions and savings.

The ANC has pledged to change the Constitution to accelerate the expropriation of land without compensation to address racially skewed ownership patterns dating back to apartheid and colonial rule. Food security and economic development won’t be undermined by land seizures, the party says. The DA says it will protect property rights, while instituting a land-reform program that increases access to ownership, creates jobs and grows the economy. The Constitution should be left unchanged, it says. The EFF wants all land to be placed under state custodianship and equitably redistributed along demographically representative racial lines. Foreigners should be barred from owning land in South Africa, while rentals on all residential property should be scrapped, the party says.

The ANC has pledged to create 275 000 new jobs annually over the next five years by boosting local demand and exports. It aims to attract R1.2 trillion in investment over four years and set up an infrastructure fund to build rail links, roads, hospitals, schools and dams. The DA says that at least one person per household should have a job.

It plans to promote employment by growing the economy, ensuring greater regulatory certainty, cutting red tape for small business and guaranteeing a reliable power supply. The EFF plans to create special economic zones to lure investment, with tax breaks for companies employing at least 2 000 people. It also wants 80% of goods procured by the government and state companies to be locally produced and at least half of the country’s mineral resources to be locally processed.

We live in a world where facts and fiction get blurred
In times of uncertainty you need journalism you can trust. For only R75 per month, you have access to a world of in-depth analyses, investigative journalism, top opinions and a range of features. Journalism strengthens democracy. Invest in the future today.
Subscribe to News24
Related Links
Land reform gets R10bn as ANC punts expropriation
Mbete pre-SONA: Land reform, the Zondo Commission and a new Parliament building
Former president Jacob Zuma opens up about land reform
Next on Fin24
Eskom to implement stage 2 load shedding from 5pm