According to non-profit organisation Safer Spaces up to 40% of South African women have experienced sexual and physical intimate partner violence in their lifetime.
Getty Images

In a country like South Africa, which is experiencing both the current pandemic of Covid-19 and the longstanding pandemic of gender-based violence, entrepreneur Thabo Nonkenge and his SOSS Tech group have developed a tech-based solution that seeks to realise greater community cooperation for safety.

SOSS Tech has existed non-commercially for a year now as a public benefit business, creating exclusively public benefit-minded products which help solve societal problems. Their SOSS application will be ready for download and use by the end of the month.

South Africa is widely considered one of the global epicentres of gender-based violence among countries that are not conflict zones.

While gruesome stories of gender-based violence pervade the news space regularly, the rape and murder of Uyinene Mrwetyana in a Cape Town Post Office branch last year cast focus on the issue.

According to non-profit organisation Safer Spaces, 56% of all the women murdered in 2009 were killed by an intimate male partner and up to 40% of South African women have experienced sexual and physical intimate partner violence in their lifetime.

Alarmingly high femicide and rape statistics are compounded by generally non-responsive attitudes in general society towards the seriousness of the crisis of rape culture as well as an over-burdened, demoralised and ineffective police service.

As co-founder and CEO of the group, Nonkenge said SOSS Tech had created an emergency response platform that allowed users of the app respond to, de-escalate, private alert security. and emergency medical services in case of an emergency.

"We are the world's first crowd-sourced personal safety platform in that we have created a way to allow everyone to call for help from their smart devices and have their emergency attended to in a quick and effective way using people who also have the platform on their phones," said Nonkenge.

Nonkenge said SOSS Tech was a technology company that could be compared with Uber in the way it delivered to customers.

"We do that by streamlining existing technology stacks within existing service offerings by creating a digital platform that allows for everyone to access them for the purpose of curbing violence and kidnappings," said Nonkenge.

He said what SOSS Tech was attempting to accomplish with the application had never been done before in an already advanced security industry. He said resources were integrated to allow accountability between local community members and emergency response authorities.

"In an emergency event, the user normally calls for help and then in called back by the call centre to confirm the type of emergency and then sends help.

"SOSS is different in that allows potential victims to call for help and get a response when they sense danger and the response chain is made up of ordinary individuals and emergency authorities thus cutting the time it would normally take existing traditional emergency response platforms," he said.

President Cyril Ramaphosa said in one of his weekly newsletters that he was committed to marshaling the resources of the state to tackle gender-based violence and femicide.

"I gave an undertaking that we would review our laws around gender-based violence. One of the key demands made by many women's organisations was that the laws of our country should be tightened on granting bail to suspects and enforcement of long sentences for offenders," said Ramaphosa.

"Through the introduction of these bills, we are honouring the promise we made to the protesters last year and to all the women of this country.

"The three amendment bills are designed to fill the gaps that allow some perpetrators of these crimes to evade justice and to give full effect to the rights of our country's women and children," Ramaphosa said.

Nonkenge said, being in Africa, made it possible to build a business that "spreads uBuntu in the most socially useful way".

He said he would like to see the app become the platform of choice for collaborating with multiple parties to solve the problem of a lack of community and personal safety in rural and urban areas.

We live in a world where facts and fiction get blurred
In times of uncertainty you need journalism you can trust. For only R75 per month, you have access to a world of in-depth analyses, investigative journalism, top opinions and a range of features. Journalism strengthens democracy. Invest in the future today.
Subscribe to News24
Related Links
OPINION | SA has a major pay gap, and it's time to demand transparency
OPINION | We'd made some progress towards gender equality - but Covid-19 could wipe it out
'I write with a sense of shame': Kieswetter's letter to SARS staff about gender-based violence
Next on Fin24
Youth unemployment: A fundamental change in mindset needed 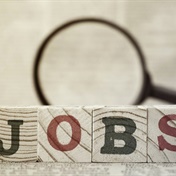