Germany’s investment in SA fuelled by its carmakers Discussions centred on leveraging investment opportunities presented by the fourth industrial revolution, and collaboration in renewable energy and the acquisition of critical skills.

In 2018 Ramaphosa launched his investment drive to attract $100bn of foreign investment over five years, securing pledges for over half that shortly thereafter.

Following several years of low-level inflows, foreign direct investment (FDI) in SA made a significant recovery in 2018, generating $5.3bn compared with $2bn in 2017, according to UNCTAD’s Investment Trends Monitor released in January.

FDI in 2019 almost mirrored 2018’s, with inflow a little over $5bn. But future FDI prospects may not be as bright.Dr Thabi Leoka, an independent economist who also sits on Ramaphosa’s Economic Advisory Panel, says the current SA socio-political landscape is not conducive to attracting investment.

“The house internally is dirty, … we need to focus on cleaning this house first,” she said, speaking at Toyota SA Motors’ State of the Motor Industry event (see box).Still, Ramaphosa’s investment drive has drawn nearly R11bn from German companies, the bulk in automotive and advanced manufacturing sectors.

Development Plan. SA’s three German carmakers – BMW, Mercedes-Benz and Volkswagen – have between them invested R20.1bn into SA since 2018.

“The existence and growth of BMW in SA demonstrates the long-standing economic ties between our countries,” Ramaphosa said at a recent BMW event announcing a R113m school investment.

The Reserve Bank confirmed R90.4bn of inward FDI from Germany in 2018 (see pie chart) and R55bn for the first three quarters of 2019. In 2017 German investment in SA accounted for €6.65bn, the German embassy in SA told finweek.

“SA is a key market and location for German companies – ranging from highly specialised small- and medium-sized firms to the large automobile companies,” German ambassador Martin Schäfer said in an email. 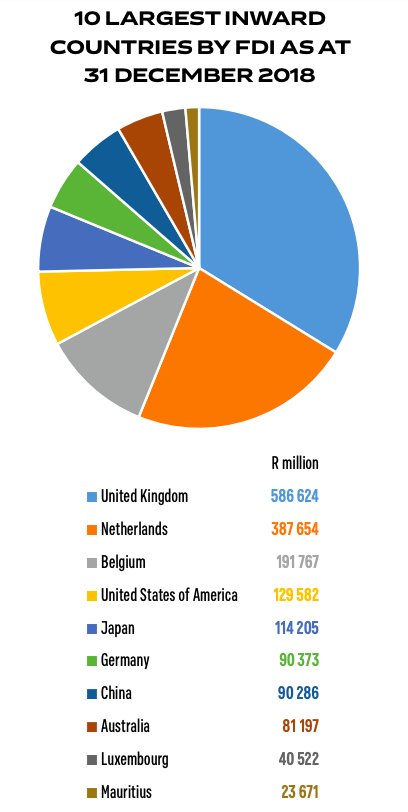 Toyota South Africa Motors (TSAM) announced a further R4.28bn in investment in SA’s economy recently in addition to the more than R12bn it already invested over the past decade.

This latest investment will generate approximately 1 500 new jobs and an additional R2.85bn annually towards SA’s economy, Andrew Kirby, CEO of TSAM, said at the State of the Motor Industry event in Kyalami in late January.

The lion’s share – R2.43bn – is for an all-new passenger model which will replace the Corolla (not Corolla Quest) production line, due to end in 2020. Production of the new vehicle includes a Toyota Hybrid Synergy Drive variant.Other pockets of investment include R450m to increase local content of the Hiace Ses’fikile.

“We did that to try and protect the pricing for local purchasers,” said Kirby. “We import so much we are exposed to the exchange rate. If we don’t find ways to localise the content, our costs are just going to keep climbing.

The Hiace is a strategically important component for us to keep the wheels of the economy turning. Most commuters use taxis.”

See all newsletters
Voting Booth
How has Covid-19 impacted your financial position?
Please select an option Oops! Something went wrong, please try again later.
I'm not really directly affected
18% - 1936 votes
I am taking a hit, but should be able to recover in the next year
23% - 2541 votes
My finances have been devastated
35% - 3791 votes
It's still too early to know what the full effect will be
25% - 2718 votes
Previous Results
Covid-19 Money Hub
Covid-19 Money Hub - answering your business and money questions during the crisis