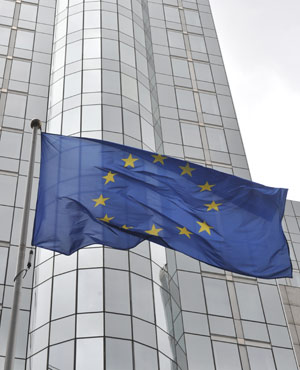 European Union leaders are considering holding a crisis summit in November to draw up contingency plans in case the United Kingdom crashes out of the bloc without a deal, EU diplomats have said.

If a meeting of EU chiefs in Brussels this week fails to make "decisive progress", the bloc could switch to Brexit no-deal mode and turn a gathering penciled in for November into a highly visible discussion about the fallout of a messy UK withdrawal, the diplomats said.

While that wouldn’t shut off the possibility of an agreement emerging, the move would be aimed at sending the UK a stark warning that time is running out.

UK and EU negotiators are working through Sunday as the outcome of Brexit talks hangs in the balance.

Neither side is sure they will clinch a deal in time to meet a self-imposed Monday deadline before a meeting of leaders in Brussels on Wednesday.

The European Commission told ambassadors on Friday that it was a make-or-break weekend.

The EU has previously said the November summit would go ahead only if a deal emerges this week, and would act effectively as a signing ceremony after giving the two sides a month to tie up loose ends.

But if there’s no progress this week, some governments want to announce as soon as Wednesday that the November gathering should be used for no-deal planning.

Others think that if this week’s meeting fails to make a breakthrough, they should abandon the November meeting and instead wait until a scheduled summit in December to have another go. Any delay could could spook investors, who are increasingly pricing in the prospect of a deal.

Time is against the UK. Even if a deal is reached with the EU, Theresa May’s government needs the backing of British lawmakers.

At least one Cabinet minister is considering resigning over the prime minister’s Brexit position, according to people familiar with the situation.

May doesn’t have a majority in Parliament and the concessions floated so far risk alienating two key groups.

The Northern Irish Democratic Unionist Party objects to the current solution for the Irish border as it will erect some barriers between the province and the rest of the UK.

Hard-line Brexiteers object to it because it risks keeping the UK tied to EU rules indefinitely.

DUP leader Arlene Foster thinks Britain’s probably going to crash out of the EU next year without a deal, according to emails obtained by the Observer. Former Brexit Secretary David Davis, writing in the Sunday Times, urged senior ministers to rebel against May’s "flawed" plan to keep the nation in a customs union with the EU.

The EU wants leaders to coordinate their "no deal" planning because some of the responsibility lies with national governments and some with the EU centrally.

The bloc has already said a messy divorce could disrupt aviation and other transport networks, customs procedures, the flow of medicines and business supply chains.

The UK government is also stepping up its no-deal planning, and on Friday released another batch of papers detailing the consequences of the talks collapsing.

Related Links
How to win a Brexit vote: The Parliament arithmetic facing May
What would Britain’s business relationship with Africa look like post-Brexit?
EU working 'day and night' on November Brexit deal
Share
Next on Fin24
Saudi Arabia vows retaliation against punitive measures