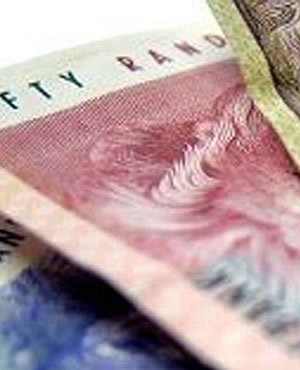 Cape Town – The rand held steady in early trade on Tuesday following news that the ANC has given President Jacob Zuma an ultimatum to step down.

The rand rallied on Monday afternoon on rumours that Zuma had finally caved in under pressure and decided to resign. The Presidency rejected this at the time as "fake news".

The local currency - which held steady in the high R11.90s to the greenback for most of the trading day Monday, on the back of dollar weakness and signs of Zuma's imminent departure - had strengthened almost 1% to trade at R11.88 to the dollar by 16:30 on Monday.

For the rest of the trading session and in overnight trade in New York, the local unit traded in a narrow band before closing trade on R11.94/$.

The rand weakened 0.3% to R11.97/$ at 03:28, shortly after news broke that Zuma was given an ultimatum to resign after yet again refusing a request to resign voluntarily.

Market watchers said earlier on Monday they expected the rand to firm to as high as R11.70/$ should Zuma step down as head of state.

Alex Paynter, market analyst of Dynamic Outcomes, told Fin24 on Monday afternoon that market movements have not followed rational thinking, and rarely do.

"This is because every bit of information, including expectations, fears, perceptions and doubts, are all factored into the market price at any point in time. I believe most people have already factored in his [Zuma's] resignation, and his departure may have some short-term reaction, but may not have as big an impact as people would have thought.”

ANC president Cyril Ramaphosa, meanwhile, on Sunday told a crowd of about 3 000 people on the Grand Parade in Cape Town that “our people want this matter finalised”.

"The national executive committee will be doing precisely that. We know you want closure on this matter," he said.

#SouthAfricans will have every right to know the exact details of any deal struck with Jacob #Zuma for #ZumaExit. The electorate are due complete transparency - after all, they are the voters - have paid for misrule & will pay any settlement.

Related Links
ANC is said to order Zuma to quit
ANALYSIS | Rand takes global & local volatility in its stride
CHART: Rand last looked this good a decade ago
Share
Next on Fin24
Rand strengthens to below R17/$