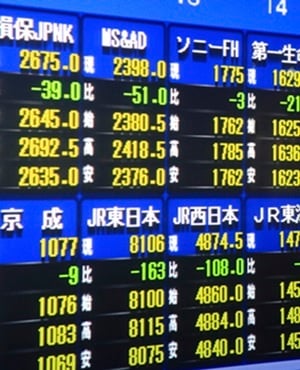 Tokyo - Asian stocks slumped along with US index futures after China weakened the yuan, underscoring concern the world’s second-largest economy is struggling.

The won fell with shares in Seoul after North Korea conducted its fourth nuclear test.

Japanese equities dropped and contracts on the Standard & Poor’s 500 Index slid 0.9% as of 2:22 p.m. in Tokyo. Kim Jong Un’s regime detonated a hydrogen device at an underground test site in the far northeast, the official Korean Central News Agency said.

The yen advanced to a more than two-month high amid demand for safer assets, as Australian government bonds extended their climb and Treasuries advanced for a fifth session. Gold held gains, while zinc led industrial metals lower in London and Shanghai on concerns demand is ebbing in China.

“The outlook on China isn’t great to start with so this seems to be an environment where you sell first and ask questions later,” said Simon Grose-Hodge, a Singapore-based investment strategist at LGT Group, said by phone. “People are pretty risk averse. When you add in geopolitical issues there’s another excuse for people to be relatively timid. On a day like today it’s another reason to be fearful rather than brave.”

The Bloomberg-JPMorgan Asia Dollar Index fell to the lowest level since April 2009 as China’s central bank weakened the yuan’s reference rate for the seventh day in a row, heightening the risk of a currency war. The gap between the yuan rate inside China and that for the currency traded offshore expanded, underscoring speculation the government faces pressure to devalue its currency to aid the economy. China’s CSI 300 Index rose 0.4%, gaining for a second session after Monday’s 7% rout.

The MSCI Asia Pacific Index sagged 1%, and has lost more than 3.5% since December 31. Japan’s Topix gauge retreated 1.5% after earlier jumping as much as 0.7%. The Kospi index dropped 0.6% in Seoul.

“China is still a very underestimated risk,” Rainer Michael Preiss, a strategist at Taurus Wealth Advisors, told Bloomberg TV in Singapore. “The most elegant way out of a very complicated problem is to further devalue the currency and that would have a very negative impact on Asia in particular but also on other emerging markets. That’s not fully priced in.”

Futures on US shares declined after the S&P 500 added 0.2% on Tuesday amid a retreat in shares of Apple Inc. The world’s most valuable company slipped to its lowest level since October after the Nikkei newspaper reported it cut production of its latest iPhone model by nearly a third.

The yuan fell 0.5% in Hong Kong’s freely traded market as well as in Shanghai, with both exchange rates sinking to their weakest levels since at least April 2011. The offshore rate fell to a record 2.2% discount to the onshore one prior to the start of Wednesday trading in Shanghai, before the spread narrowed to about 2%. The yuan sank 0.5% to a five-year low in offshore trading after the central bank lowered its reference rate for the seventh day in a row.

“This isn’t good for the rest of the world. Until China stops weakening the yuan, global markets will struggle to stabilize,” said Koichi Kurose, Tokyo-based chief market strategist at Resona Bank. “The Chinese authorities may be trying to prop up the economy by boosting exports, but while that’ll help one part of China’s economy, it comes at the sacrifice of someone else.”

South Korea’s won dropped 0.6% to the lowest level since September.

Australia’s currency fell 0.5% and the New Zealand dollar tumbled 0.8%. China is the largest export market for both South Pacific nations.

Treasuries advanced, heading for a fifth-straight session of gains, with the yield on 10-year notes down to 2.22%.

The yield on similar-dated Australian debt dropped four basis points to 2.77%. The rate on Japanese government securities due in December 2025 was down 0.5 basis point to 0.25%. That matches the lowest since January 2015, when Japan’s benchmark yield fell to an unprecedented 0.195%.

Zinc on the London Metal Exchange dropped 1.2% to $1 554 a metric ton. Copper fell 0.3%.
Oil traded near a two-week low before weekly US government data forecast to show stockpiles rose in the world’s biggest crude consumer.

Gold for immediate delivery advanced 0.1% to $1 078.82 an ounce following two days of gains. Demand for the precious metal has been bolstered as gyrations in global stock markets enhance its allure as a haven investment.