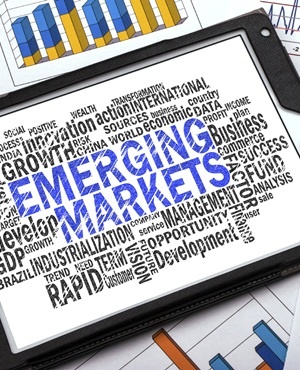 The yuan slid to a five-year low, while Malaysia’s ringgit led the decline in a gauge of developing-nation currencies. South Korea’s won weakened after North Korea said it successfully tested a hydrogen bomb, adding to the New Year’s geopolitical risks already heightened by tensions between Saudi Arabia and Iran. Turkish bonds fell after inflation quickened to the highest in more than a year.

“A weaker yuan increases the competitiveness of Chinese exports and reduces the Chinese propensity to import,” said Simon Quijano-Evans, a London-based emerging-market strategist at Commerzbank AG, who prefers Central Eastern European credits, including Hungarian, Romanian and Serbian international and local currency bonds. “As a result, those more exposed to China and the commodity story comes under pressure, while the rest suffer from negative spill over.”

Technology companies as a group were the biggest decliners in the MSCI Emerging Markets Index. Banque Saudi Fransi paced losses on Saudi Arabia’s Tadawul All Share Index, which headed for a 2012 low as oil prices dipped under $35 a barrel.

The People’s Bank of China lowered the yuan reference rate to the weakest since April 2011, spurring concern that the government is facing pressure to devalue its currency to revive growth in the world’s second-biggest economy. That’s raising the risk that developing nations will have to weaken their currencies to stay competitive.

The private Caixin Media and Markit Economics Chinese services gauge fell to a 17-month low of 50.2 in December, close to a level signalling contraction, according to a report on Wednesday.

The MSCI World Index is valued at a multiple of 15.4. The developing measure’s 14-day relative- strength index fell to 28.8, below the level of 30 that some traders see as a signal a market is set to rebound.

A gauge tracking 20 emerging-market currencies dropped 0.4%, its fourth day of losses. The ringgit weakened 1.2% as China’s cut in the yuan’s fixing fueled concern that a slowdown in the region’s biggest economy will crimp demand for Malaysian exports.

The won fell 0.6% to the weakest level since September. North Korea said it successfully tested its first hydrogen bomb, escalating tensions with neighbouring countries. The regime in Pyongyang detonated a hydrogen device for the first time at 10 a.m. local time, its official Korean Central News Agency said. The explosion was initially detected as a magnitude 5.1 earthquake by the US Geological Survey.

The yuan fell 0.7% in Hong Kong’s freely traded market as well as in Shanghai, with both exchange rates sinking to their weakest levels since at least March 2011. The gap between the two rates reached a record before the start of onshore trading on Wednesday.
Stocks

Nine out of 10 industry groups in the MSCI developing- markets measure retreated as a measure of technology companies tumbled to the lowest level since October 1. Largan Precision and Catcher Technology both slumped more than 5 percent in Taipei, sending Taiwan’s Taiex index to the lowest close since September 7, after Nikkei Asian Review reported that Apple would reduce the first-quarter output of its latest iPhones by about 30%.

China’s CSI 300 gained 1.8%, the most in two weeks, while the Shanghai Composite Index climbed 2.3%. Policy makers revived intervention in the $6.5trn market this week as state-controlled funds bought equities on Tuesday after a 7% plunge on January 4 and the securities regulator signalled a selling ban on major investors will remain beyond its January 8 expiration date, according to people familiar with the matter.

The yield on Turkey’s benchmark 10-year bond rose to the highest since March 2014 on a closing basis as accelerating inflation and the country’s deteriorating risk profile has investors demand higher returns.