Global stock markets were mostly weaker Wednesday following a chaotic US presidential debate in which Donald Trump again suggested the election could be fraudulent while hopes for a second coronavirus stimulus package out of Washington helped lift the dollar.

Sentiment was additionally hit after Anglo-Dutch energy giant Shell announced plans to axe up to 9 000 staff over the next two years to combat this year's coronavirus-driven slump in oil prices.

Yet it was Republican Trump's chaotic jousting with Democrat opponent Joe Biden that grabbed the spotlight.

"Pollsters point towards a potential Biden gain in the polls... with the president's erratic style likely helping Biden to shift the focus away from his often lacklustre memory and debating abilities."

Trump and Biden traded personal barbs in the first of three debates ahead of the November 3 vote, with observers saying the president had needed a strong showing as he trailed in most national and battleground polls.

The much-anticipated match-up, however, descended almost immediately into a shouting match, with little of substance emerging from either man.

When asked if they pledged to urge calm and refrain from declaring victory if the election result is not immediately known, Biden said "yes", while Trump would not commit, saying that if he saw "tens of thousands of ballots being manipulated, I can't go along with that".

The president's claims about voter fraud have raised concerns among investors that the result could be drawn out and fuel uncertainty for the US economy.

"President Trump and Democrat nominee Joe Biden engaged in what can only be described as a fact-free name calling contest," said CMC Markets analyst Michael Hewson.

"Financial markets appear to have taken their cues from that, shrugging off some better than expected Chinese PMI data, which showed improvement in both manufacturing and services in September."

The Chinese data failed to lift optimism, as the ever-present gloom of rising virus infections and deaths also continues to dampen the mood on trading floors as dealers fret over the re-imposition of containment measures in key economies.

Elsewhere, a top aide to Democratic House Speaker Nancy Pelosi said Tuesday that the lawmaker had spoken for a second straight day with US Treasury Secretary Steven Mnuchin over a long-deadlocked but much-anticipated stimulus package to rescue the battered US economy.

The pair have agreed to continue negotiating, raising hopes they could break a months-long impasse.

We live in a world where facts and fiction get blurred
In times of uncertainty you need journalism you can trust. For only R75 per month, you have access to a world of in-depth analyses, investigative journalism, top opinions and a range of features. Journalism strengthens democracy. Invest in the future today.
Subscribe to News24
Related Links
WATCH | Tax revelation could blot Trump's business brand
Trump ban on TikTok is temporarily blocked by federal judge
Rand breaches R17/$ amid second wave fears and Trump's anti-China comments
Next on Fin24
Oil sinks more than 5% on fears over virus-hit demand 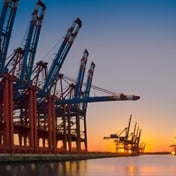