Wall Street slumps after a temporary halt in trading Wall Street stocks were decisively lower at mid-morning Monday as mounting worries over the coronavirus and sinking oil prices led to a temporary halt in trading.

The suspension was triggered after the S&P 500's losses hit seven percent, with trading resuming after 15 minutes.

After two difficult weeks amid rising fears over the virus, markets appeared to enter a new phase of worry early Monday after oil producers failed to reach an agreement on a pact to limit output, sending oil futures crashing.

In another sign of anxiety, yields on US Treasuries again plummeted to fresh all-time lows as demand surged for refuge assets such as bonds.

US President Donald Trump weighed in, tweeting "Good for the consumer, gasoline prices coming down!" and blaming the market turmoil on a dispute between Saudi Arabia and Russia.

The virus itself continued to prompt major economic dislocations, as Italy imposed a month-long lockdown on the country's northern region and additional major sporting events were canceled, along with concerts and industry conferences.

The International Monetary Fund called for "substantial" stimulus and international coordination to counteract the economic impact of the spreading coronavirus epidemic, while the New York Federal Reserve Bank announced it will increase its daily injections of cash into financial markets by $50 billion to $150 billion to boost market liquidity.

A note from Goldman Sachs said the S&P 500 could finish 2020 at 3,400 under a scenario where coronavirus is "widespread" but "relatively short-lived," but could finish at 2,450 if the outbreak pushes the US into recession.

While the losses were broad-based, petroleum-linked equities were especially battered, with Dow member Chevron down about 10 percent, oil services titan Halliburton off nearly 35 percent and mid-sized producer Apache falling 40.1 percent.

Banks were another big casualty, with Bank of America, Citigroup and JPMorgan Chase all down more than 10 percent.

Another big bank, Wells Fargo, fell 8.4 percent, as it announced that Elizabeth Duke stepped down, the latest ripple effect from a bogus accounts scandal that has led to steep fines and an overhaul of the bank's leadership.

Charles Noski, who joined the board in June 2019, will serve as the new chair, the bank announced.

Related Links
Bloodbath on the JSE as markets plunge around the world
Sasol loses 45% in minutes after oil crash
Economic week ahead: Not much to be optimistic about
Share
Next on Fin24
Oil edges higher on upbeat Aramco and signs virus easing in US 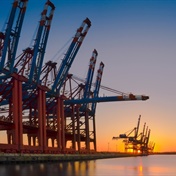