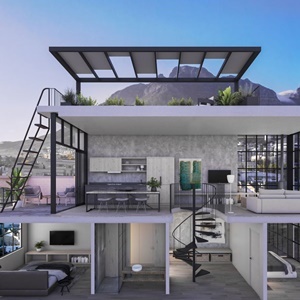 Cape Town's East City Precinct - between the CBD and District Six - are undergoing a revival and the new The Harri residential development is an example of this trend.

The Harri, is a 39-unit studio or penthouse apartment development.

According to Jeff Kleu, co-developer with Steven Lampert, both of property-development company Sepia and Silk, last year, the Cape Town Central City Improvement District (CCID) identified the area as having the highest overall occupancy rate (97%) of all four of its city precincts.

A R75 million hotel opened there earlier this year, following three other commercial and retail developments in 2017. Two further residential mixed-use developments are planned for 2020.

Kleu points out the proximity of The Harri to entertainment and retail options. The development merges micro-apartment living with co-working office spaces to create a co-living environment.

"The Harri is very appealing to many professionals working for established creative, technology and design firms in the area, as well as visitors wanting a different inner-city tourism experience," says Kleu.

It is scheduled for completion in October 2020. The 32 studio apartments vary in size from 24m² to 49m² - furnished or unfurnished - with prices starting from R999 995 including VAT.

The seven two-storey penthouse apartments, varying in size from 87m² to 117m² (furnished or unfurnished), have a starting price of R3 849 995 including VAT. All have a rooftop terrace and offer uninterrupted views of Table Bay and Table Mountain.

We live in a world where facts and fiction get blurred
In times of uncertainty you need journalism you can trust. For only R75 per month, you have access to a world of in-depth analyses, investigative journalism, top opinions and a range of features. Journalism strengthens democracy. Invest in the future today.
Subscribe to News24
Related Links
What interest rate cut means for residential property market
SA average house price growth dips in 2019
MONEY CLINIC: Should I wait to settle my bond before getting another property?
Next on Fin24
Half of Sydney houses now sell for at least R10m