The removal of Finance Minister Pravin Gordhan and Deputy Finance Minister Mcebisi Jonas from their positions also ends the biggest political bromance since Barack Obama and Joe Biden parted ways as president and vice-president of the US.

Following Nhlanhla Nene’s firing as Finance Minister in 2015, the two politicians were united in their tough stance against corruption and poor governance.

While Gordhan could keep his audience on their toes with his witty retorts and statesman-like pronouncements on the moral code of the nation, Jonas would make those around him immediately relax with his down-to-earth persona, but added to Gordhan's narrative.

"That's your job," Gordhan quipped on Friday in their last press conference together in their current roles. "To always add more to what I say."

They may be polar opposites in their personalities, but the chemistry was electric. After they put their heads together on Friday to “deliberate” on their answers to questions by the media, Gordhan made a joke about their close bond.

Gordhan again praised Jonas for refusing to “take that bag of cash” that he was allegedly offered by the Guptas.

Their unity was anchored in their moral code and their passionate drive to bring inclusive growth to the masses of South Africans that still live in poverty and without jobs.

They were also not scared to speak out when they knew it would cost them their jobs and the glory of being a distinguished minister.

Gordhan and Jonas leave the National Treasury in a healthy state, with a plethora of experienced and talented civil servants.

Their plea to their successors is to retain the integrity of the organisation and to act on the advice of their civil servants on technical fiscal and economic matters.

The unity was made complete by their joint recall from their positions, solidifying their bond in what ever direction they now embark.

The two politicians would often take turns speaking in public, always offering the other a chance to add to the message.  (Photo: Supplied) 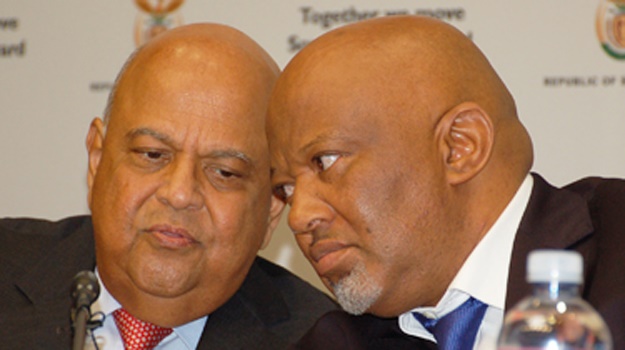 See all newsletters
Voting Booth
How has Covid-19 impacted your financial position?
Please select an option Oops! Something went wrong, please try again later.
I'm not really directly affected
19% - 196 votes
I am taking a hit, but should be able to recover in the next year
26% - 268 votes
My finances have been devastated
29% - 295 votes
It's still too early to know what the full effect will be
26% - 260 votes
Previous Results
Covid-19 Money Hub
Covid-19 Money Hub - answering your business and money questions during the crisis