Cape Town – An African adventurer famous for his headline-grabbing races around the globe has found a home in the most unlikely of places. On a World War 2 boat on a tiny river in England.

Sean Conway’s epic endurance battles have seen him cycle around the world as well as run, swim and cycle the length of the United Kingdom.

The Zimbabwe-born and South African-bred Forrest Gump look-alike certainly doesn’t like the idea of living a dull life in the UK. So he makes everything interesting.

When he bought a dilapidated vessel called Lady Sybil on eBay at the end of 2013, he didn't realise it would would take so long to turn it into his home. Or get quite as much media coverage, like this CNN report. 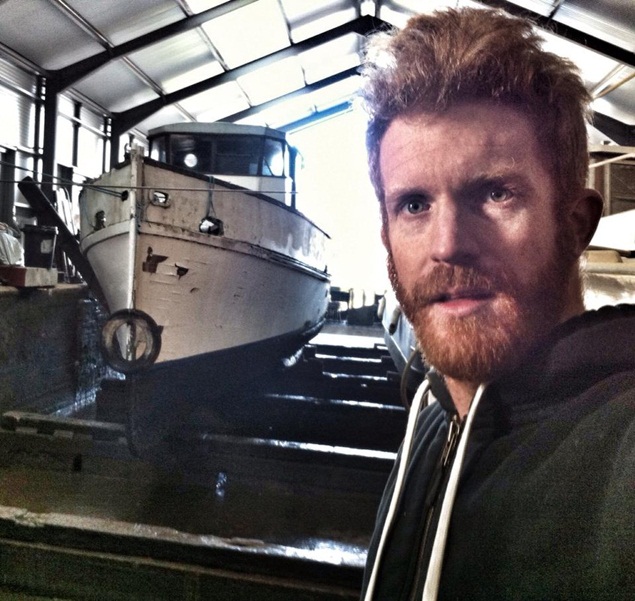 Sean Conway and Lady Sybil on the dry dock getting her leaks plugged in. (Photos: Supplied)

How much did you get the boat for on eBay?

Lady Sybil in her glory days. She was built in 1931 and was used in Dunkirk during World War 2. (Photos: Supplied).

What was its story?

It was a purpose built 60ft RAF Pinnace boat built by Harland and Wolff (the guys who built the Titanic) and used as a harbour protection boat in WW2 and also to transport captains and injured from one air gunship to another. It could carry eight people or so and originally steam powered with a gun on the front.

Proof that some R.A.F members were once on board.

I am trying to find a decommissioned gun to bring her back to life. Also, no-one will stop me from mooring somewhere if I have a gun on my boat. I can only find three Pinnace boats left. Most sank or were dismantled for their teak hull. (It’s illegal to import teak into the UK so you can only re-use teak already here).

It’s currently in Worcester in the UK. Where do you plan on living on it?

I am planning on moving to London on The Thames when she is ready. Bear Grylls has his boat on the Thames. Maybe we can be neighbours and get up to some water based adventures together. Tell us about the renovations and how much you have spent doing it?

Well you know what the anagram for BOAT is? ‘Bring On Another Thousand’ It’s true. Everything needs fixing on my boat. I think in the end it will cost be in the region of £30 000 (R535 034). The hard part is that it’s all cash at the moment as no one gives loans for wooden boats built in 1931.

That is why it’s taking so long for me to complete. The other important thing is to keep it as original as possible. It’s a ‘listed’ (vessel of historic importance) boat and I want it to have an old cottage feel to it: Nothing new and shiny. I want cracks in the wood table top. Over 17 000 people live on boats in the UK. It’s a great scene and the best part is that if you don’t like your neighbours you move away. In a weird coincidence, there is another RAF boat opposite me, built a few years after mine and also used in the war, so we chat endlessly about various boaty things.

My boat has a nice deck at the back to braai on which is also nice, in the summer. The only thing is that it’s cold in the winter. She still needs another fireplace. Do you plan on doing any adventures on your boat?

I’ve always wanted to travel south along all the canals through France to the Med. It would take a few months, but an amazing journey as the French canals are huge. My boat is a bit too big for UK canals, which means I can really only do a few rivers and the coast. Have you building an interesting home? Or do you live in one already? Tell us your story.

See all newsletters
Voting Booth
How has Covid-19 impacted your financial position?
Please select an option Oops! Something went wrong, please try again later.
I'm not really directly affected
18% - 1573 votes
I am taking a hit, but should be able to recover in the next year
23% - 2065 votes
My finances have been devastated
34% - 3080 votes
It's still too early to know what the full effect will be
25% - 2235 votes
Previous Results
Covid-19 Money Hub
Covid-19 Money Hub - answering your business and money questions during the crisis