OneRandMan: I can now see how I waste 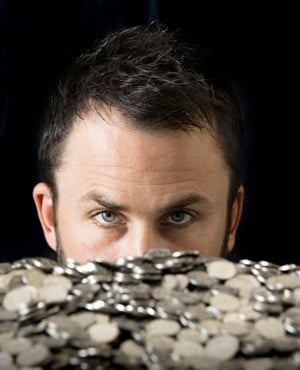 The OneRandMan is learning how to save, R1 at a time. (supplied)
The OneRandMan has given Fin24 an exclusive update on his life with R1 coins. Fin24’s first story on the architect who decided to get his July salary paid in R1 coins was widely read and commented on. We found out how he’s doing in this Sanlam initiative, two weeks into his experiment:

Now that you’re a few weeks into this new (temporary) life, do you regret it? If so, why?

Not at all... although I definitely underestimated the impact it would have on my life! It's been quite an adjustment. Some people may think that I've taken a month out of my life to do this experiment but I haven't at all. I'm still going to work, feeding my dogs, going out with family and friends and, of course, paying my bills.

The only difference is that I'm doing it all in R1 coins. It's been exciting, frustrating and eye opening - and I'm only two weeks into it. For the first time in a very long time, I'm consciously thinking about my money and how I spend it.

Cards and internet banking have made spending so convenient that I've realised how easily I spend without even really noticing I'm doing it. Having to - quite literally - live my life R1 at a time has suddenly made my experience with money so much more tangible.

Watch: View the first episode, when he received his salary in R1 coins.

What have you learned about savings personally so far?

That I haven't made savings a priority! It also became very clear, as I was dividing up my money into payments and other monthly expenses, that I need to get a much better handle on my spending to be able to save more.

I'm not making my money work for me, and looking at it now, it just seems so silly. I'm spending far too much on my car and accounts, for example. I've realised that I've never really looked at my salary and budgeted properly.

Watch: OneRandMan focuses on his budget planning in episode 2.

You must be suffering to an extent. This often brings about strong philosophical happenings and thoughts. Any you’d like to share?

Sitting looking at my salary and expenses all over my coffee table, I remembered something my grandfather once said to me - never buy a car with a loan. Looking at the amount of money that goes towards paying off my car every month, I wish I had listened to that advice.

It really made me think how times have changed. People don't work for the money they need to get something and then buy it any more, they buy it first and then work to pay it off. We get the maximum amount of money we can out of the bank, instead of spending what we actually have.

I've also realised how much is wasted on impulse buying, the things you don't need but somehow - in the moment - convince yourself that you do. Not being able to swipe my card means that I only walk out of the shop with the things I intended to buy.

Has your girlfriend moved out yet? Why not?

We aren't actually living together, but she hasn't run for the hills if that's what you're asking. She's been really supportive and totally gets it. I've even managed to rope her in on a few late night counting sessions... two sets of hands are faster than one!

Tell us about some strange and awesome experiences you’ve had with others when paying with coins.

People have been surprised, to say the least! And my trusty Tupperware wallet has turned more than a few heads. I've been asked why I don't just deposit my coins at the bank, and one teller even wanted to know if I had robbed a vending machine. People just aren't used to cash any more - never mind someone paying in such small coins.

Everyone has been really nice about it though... I haven't been turned away (yet). I think the funniest has been the people behind me in the queues, they seem to quickly disappear to the next teller the minute I start counting. But let me not give too much away, you'll see some of the reactions for yourself in episode 3 that will be uploaded this Saturday (July 19).

Has your professionalism at work suffered? They’re obviously understanding. Or are they?

Completely. I discussed it with my boss before I took on the experiment so they've been on board from the start. It's 'business as usual' around the office - meetings, deadlines and work pressures haven't changed. Paying for lunch just takes a bit longer.

Is Sanlam being of assistance during this process? Are they giving advice and support?

Well, this experiment is only possible because of Sanlam. The value of it though is in the fact that it is a real life experience, so giving me advice during this month would take away from that. Instead, they are observing closely and have experts sharing their thoughts and lessons after each episode.

How has the undercover filming gone?

It's going well. It felt a bit strange at first - it's tough trying to act natural when you know you're being filmed. I've almost gotten used to it now, though... wonder if I'll need to readjust again to life without hidden cameras after this is over?

I hope so. I'd like to think that we're all learning through my experience, and that it will really change the way we think about our money. I've been completely blown away by the interest and support from everybody - in South Africa and around the world.

People have posted comments, asked questions and given me some very useful tips! It's really comforting to know that I'm not the only one wondering where their salary goes every month. I feel like we're all in this together, and it's making such a big difference.

Your story has clocked over 100 000 views on Fin24 – does the attention (and I know your name stays out, but there must be leaks) get to you at all? Or has there not been any?

That's incredible, thanks for sharing those stats with me. I really appreciate the exposure and hope the Fin24 readers are finding it useful. The response has been overwhelming but, in a strange way, it almost feels like I'm sharing it with each individual rather than a crowd of people, if that makes sense.

Visit the OneRandMan's Youtube homepage to keep up to date on his savings exercise.

We live in a world where facts and fiction get blurred
In times of uncertainty you need journalism you can trust. For 14 free days, you can have access to a world of in-depth analyses, investigative journalism, top opinions and a range of features. Journalism strengthens democracy. Invest in the future today. Thereafter you will be billed R75 per month. You can cancel anytime and if you cancel within 14 days you won't be billed.
Subscribe to News24
Related Links
Man pays with R1 coins only
Investment advice for 20s, 30s, 40s and 50s
Not your run-of-the-bill savings tips
Next on Fin24
4 things you need to know about tax-free savings accounts