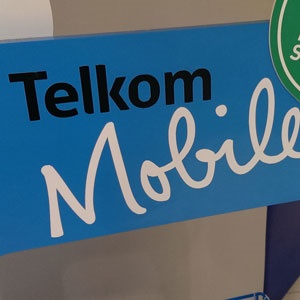 Cape Town – Fixed line revenues are tumbling but mobile has helped spur a jump in earnings at Telkom, the company said in its interim results statement on Monday.

But revenue from mobile service and subscriptions increased 41% to R1.2bn and data revenue jumped 69% to R711m.

“We are pleased with the improved performance of our mobile business and our multiyear cost efficiency programme and will continue with these initiatives to bring about further improvements,” said Telkom Group chief executive officer Sipho Maseko in a statement.

While debt levels have increased in the period under review, Telkom said it intends to spend R10bn through its Openserve wholesale broadband vehicle which it hopes will connect one million homes to fibre broadband by 2018.

Telkom also said that despite strong competition, its ADSL revenue increased by 5%. Capital expenditure increased by 20% to R2.3bn as the firm expands its fibre and mobile networks.

That investment is vital for Telkom which has just 2.2 million mobile subscribers, making it the smallest player in SA. The company is considering a bid for Cell C which should give it around 25 million subscribers should the deal get the green light.

The company is also racing to develop its LTE or higher speed long term evolution sites to compete with Vodacom and MTN.

Leading SA operator Vodacom said that it expects data to make up half of revenue by 2018.

For Telkom, moving to mobile is key as fixed line voice revenue declined by 3%.

“Although challenges remain, we are confident that our turnaround strategy and other growth initiatives will deliver the results we have been working toward,” said Maseko.

We live in a world where facts and fiction get blurred
In times of uncertainty you need journalism you can trust. For only R75 per month, you have access to a world of in-depth analyses, investigative journalism, top opinions and a range of features. Journalism strengthens democracy. Invest in the future today.
Subscribe to News24
Related Links
Icasa transfers On Digital Media licence
Vodacom calls for OTT regulation
Telkom confirms bid to buy Cell C
Next on Fin24
New data rules: MTN‚ Vodacom‚ Cell C and Telkom respond