PICS: Trolls take aim at Note 7 with these memes

Johannesburg - It has only been two days since Samsung killed its Note 7 smartphone – yet internet trolls are capitalising on the death of the device through memes.

The controversial smartphone - which Samsung discontinued on Tuesday - was blamed for numerous fires around the world after battery issues caused the device to explode.

Bloomberg reported that the South Korean company cut its third-quarter operating profit by $2.3bn (R33bn) after ending production of the smartphones, the first official indication of how much the crisis will cost the company.

Samsung South Africa has also confirmed that production of the device has ended.

“For the benefit of consumers' safety, we stopped sales and exchanges of the Galaxy Note 7 and have consequently decided to stop production," Samsung South Africa told Fin24.

The device was scheduled to arrive in the country on November 13.

Meanwhile, the internet was set ablaze after the announcement and as the controversy around the devices exploding unfolded across the globe, the incidents opened a floodgate of memes.

Here is a collection of a few: 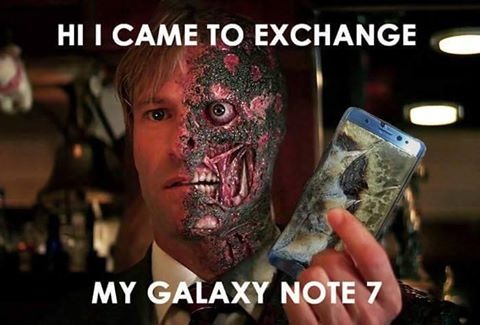