"Distance can play the role of enemy to many businesses - aside from the kilometres that may exist between boardroom A and conference room B, it can also create a misunderstanding between hypothesis and proof; time that passes between diagnosis and cure, revisions that multiply between 'easy fix' and major bug," said Richard Henn, CEO of Kathea Communications.

As the speed of the internet increases many have identified video as a growth driver for data consumption.

The company showed that video traffic online jumped to 53% of all data traffic on the internet in 2013. Some companies have included video conferencing in their consumer facing services.

The dotFNB division of First National Bank employs video conferencing technology so that a customer may communicate with consultants for home loan queries, for example.

"The specialist products like your home loans and share investing we host through the video conference, but absolutely, this is the new face of banking," Kim Gibson-Van der Walt, head of dotFNB told News24.

In Sub-Saharan Africa, that data growth is largely mobile and service providers are racing to meet demand for high-speed services despite a poor regulatory environment. 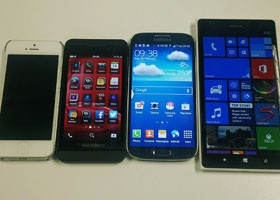 The uptake of smartphones will contribute to data demand. (Duncan Alfreds, News24)

According to data from Ericsson's Mobile Data Traffic Growth report for 2013 to 2019, the region's data appetite is huge and expected to grow at 65% to 2019 and beyond.

Submarine broadband cables have also dramatically increased South Africa's connectivity with the rest of the world.

So-called "last mile" connections are still largely the domain of state-owned enterprise Telkom as the company owns most of the last mile hardware.

There are around six million cable last connections possible in the country, but according to Telkom only about 800 000 are broadband subscribers.

Mobile operators Vodacom and MTN have signalled their intention to roll out fibre to the home services which should boost broadband access.

Vodacom announced an agreement to buy Neotel and MTN intends to take control of Afrihost, though both deals are subject to regulatory approval.

The government has set a deadline of 2020 for 100% broadband coverage in SA and it is expected that the majority of new broadband connections will be wireless.

According to the Draft National Broadband Policy, the challenge of fourth generation mobile spectrum has hindered the development of broadband.

"Institutional challenges associated with spectrum allocation, together with delays in the migration of analogue terrestrial broadcasting to digital, have meant that service innovation, increased competition, potential job opportunities and tax revenues have not been realised," the document says.

In SA, the regulator has yet to make an announcement on the allocation of spectrum in the critical 800MHz band.

This frequency band is seen as critical for high speed data services, but it is currently occupied by analogue TV broadcasters.