Ferial Haffajee: Middle classes pay for the years of rot – as corporates get off more easily 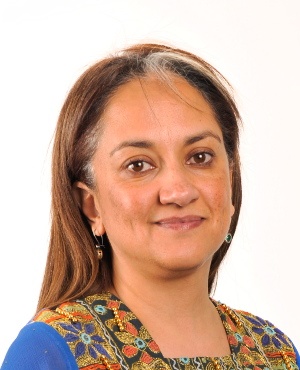 Finance Minister Tito Mboweni’s Budget for 2019 is toughest on the middle class, which pays the largest part of the cost of state capture, while it is easy on corporates, which pay the lowest taxes as a percentage of revenues raised.

Mboweni spoke allegorically about South Africa’s time from a harvest of plums (when the debt was low, tax relief substantial and social spending skewed for social justice) to what he called a time of rot.

"Despite our best efforts, sometimes, ravages and risks such as pests or rot could attack our green shoots, but we must persevere; we must prune and pluck away at the rot until there is growth," said Mboweni, who says he will stay on after the election in May.

The reform after the years of capture is expensive: Eskom is the most obvious example of the pressure that corruption has placed on the national balance sheet, but the weakening of SARS is felt directly in the pockets of ordinary South Africans.

To find the money to bail out Eskom, the government has hardened tax policy, especially for those who pay personal income tax, and it is following a policy of attrition to make savings in the civil service. About 16 000 posts have remained unfilled between 2015 and 2018.

Personal income taxes make up R552.9bn of expected tax revenue, while corporate income tax taken will be R229.6bn. The VAT is expected to rake in R360.5bn, while customs and excise collections should net R106.8bn.

The tax-free threshold has been raised to R79 000 a year, which is about R6 500 a month. "By not adjusting the income tax brackets for inflation, the government will raise R12.8bn," according to the Budget.

In other words, if you are a taxpayer, you will be paying more taxes.

In addition, the middle classes will be paying 10% a year more for electricity over the next three years to bolster Eskom’s balance sheet. With state support of only R23bn a year over three years, the tariff increase is likely to be almost twice inflation, according to the 2019 Budget Review.

Eskom has applied for tariff increases of above 15% a year over three years in hearings before the National Electricity Regulator of South Africa, but the Treasury has estimated for tariff hikes of 10%. South Africa’s large indigent population does not pay for electricity because there are pro-poor services in place; the rates of non-payment suggest that, on the whole, the unemployed and the working class cannot afford electricity.

This means it is the middle-class of about six million working South Africans who are likely to foot the lion’s share of the bill for Eskom’s tariff increases; of course, the intensive energy-users are manufacturers and miners, so this part of the Budget’s tough medicine will be spread.

"Consumer price index inflation (CPI) is expected to reach 5.2% in 2019 in response to rising food inflation associated with higher fuel and agricultural input prices. Electricity inflation is also expected to increase. The National Treasury assumes an annual adjustment of 10% in electricity prices in each of the next three years, effective from July 2019," says the Budget Review.

Tax policy is less generous than previous years, with no traditional adjustment for bracket creep (the impact of inflation on tax) because of the capture of SARS. The Budget Review makes it clear that axed SARS commissioner Tom Moyane sat on VAT refunds to boost collection levels as he came under pressure.

"The tax revenue estimate for 2018/19 has been revised down by R15.4bn, relative to the 2018 MTBPS (medium-term budget policy statement). The revision reflects a weaker economic outlook and further increases to value-added tax refunds." Workers earning R6 500 and less a month pay no personal income tax, which means that a substantial part of the employed population (6.3 million registered taxpayers) pay indirect and not direct taxes.

A breakdown of who pays income tax reveals that the middle classes pick up the major part of the personal income tax bill. While those who earn over R1.5m a year pay up 28% of the total, it’s the middle classes who contribute most to the R552.billion tax collection being targeted for 2019. 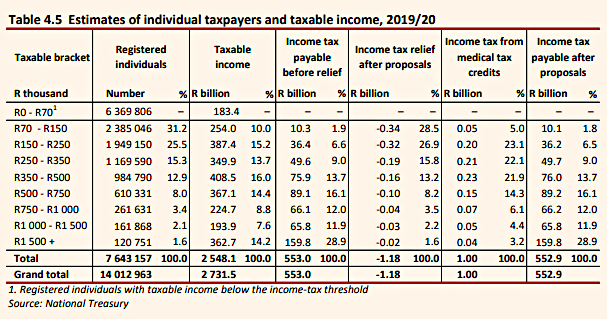 There are additional taxes coming too, like a carbon tax of 9c/litre on petrol and 10c/litre on diesel, as of June 5. To create conditions for business confidence and a more hopeful investment climate, the government has moderated corporate income tax hikes for two successive budgets.

We live in a world where facts and fiction get blurred
In times of uncertainty you need journalism you can trust. For 14 free days, you can have access to a world of in-depth analyses, investigative journalism, top opinions and a range of features. Journalism strengthens democracy. Invest in the future today. Thereafter you will be billed R75 per month. You can cancel anytime and if you cancel within 14 days you won't be billed.
Subscribe to News24
Related Links
No increases in income tax rates or VAT; sin taxes and fuel levies to rise
From Eskom to tax, this is Mboweni's budget in a nutshell
Eskom gets R69bn in financial support over 3 years, but with conditions – Mboweni
Next on Business
BUDGET WRAP | 'Boring but responsible' - finance minister gets thumbs-up from economists