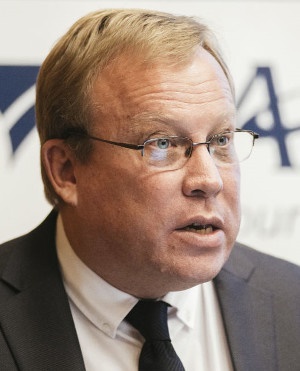 Kingon was responding to questions from members of Parliament (MPs) on Thursday in a joint sitting of the standing committees on finance and appropriations, as well as their select committees.

Treasury, led by Finance Minister Tito Mboweni, had briefed the committees on the mini budget - and the issue of dwindling revenue collections came up.

MPs wanted clarity on actions being taken to recapacitate SARS. In the medium-term budget policy statement, Treasury outlined that SARS would be recapitalised, among other programmes.

Kingon said that a successful SARS was a "fundamental building block" for the country.

"If we don't, we're going to fail," he said. "I am passionate that we must now fix things."

Kingon said among the key things was stability in leadership. Staff morale was the second issue. "Our staff morale is very low at this time. I think it is understandable. Close to 200 people were affected by moves in terms of the new operating model."

As an example, Kingon said that he had an advocate which had not been applying his skills sets to tax matters - which comes back to addressing tax avoidance and illicit financial flows.

Kingon said the key issues were flowing out of the Nugent Commission of Inquiry, which is ongoing, and the Davis Tax Committee, which addresses governance.

"At the core, the failure of an organisation is the failure to deal with proper governance. We have to fix that ... we cannot land in that boat again."

Another issue to be addressed is taxpayer trust and tax morality. Kingon said there hads been a slippage in tax compliance.

There is a growing number of people not submitting returns, said Kingon.

"We cannot allow it to continue… taxpayer behavior needs to be addressed."

A fundamental building block is service, linked to VAT refunds. Kingon said he aimed to have VAT refunds paid out at a monthly rate, and gave assurance that SARS wanted to "clean" up this situation, as this would release monies back into the economy.

The last two issues raised were system modernisation - which, according to evidence submitted to the Nugent inquiry, has been stalled - and proper skills development. "We need skilled people in our organisation to tackle tax fraud when it happens," said Kingon.

Kingon said these changes wouldn't happen overnight. There are short-term, medium-term and long-term issues to deal with. Kingon said that while he is around, he intends to fix these matters.

During questions Scof chair Yunus Carrim asks how the R27.4bn shortfall has come about- given that SARS is monitored per quarter. It appears SARS has "misled" Parliament. @Fin24 @TeamNews24

We live in a world where facts and fiction get blurred
In times of uncertainty you need journalism you can trust. For only R75 per month, you have access to a world of in-depth analyses, investigative journalism, top opinions and a range of features. Journalism strengthens democracy. Invest in the future today.
Subscribe to News24
Related Links
WATCH: Mini budget 'a missed opportunity' - Cosatu
Analysts weigh in on what the mini budget means for taxpayers
Rand falls with bonds as mini budget clouds rating path
Next on Fin24
BUDGET WRAP | Mboweni holds off on major tax increases, promises R19.3 billion for vaccine rollout