Mini budget in a nutshell: Mboweni takes bull by the horns 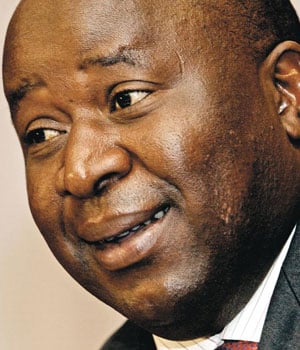 The state is hoping that these policies will lift SA’s moribund growth rate of only 0.7% - only a fifth of the world average.

The thread that ran through Mboweni’s mini budget was the expectation that Ramaphosa’s economic interventions since becoming President could boost the economy and raise growth.

“A combination of policy certainty, growth-enabling economic reforms, improved governance, and partnerships with business and labour will be key to restoring confidence and investment,” states the MTBPS.

If Ramaphosa’s plan pays off, SA can enter what National Treasury calls the “strong domestic growth scenario” with GDP rising to over 3% in the 2020’s – resulting in budget surpluses and debt stabilisation.

“We have to give substance to the package of measures to stimulate the economy,” Mboweni told journalists at a briefing before he delivered the policy statement.

Treasury’s low growth scenario means debt service costs will balloon to 18% of all government spending in 2026 – meaning almost R1 out of every five will go towards paying off loans.

“We are at a crossroads,” said Mboweni on Wednesday. “We must choose a path that takes us to faster and more inclusive economic growth and strengthens private and public sector investment”.

The need to repay VAT refund backlogs has left a 20bn hole in budget revenue projections, while another R7.4bn shortfall is projected stemmed from slower corporate income tax collections due to the weak economy.

In total, when compared to projections in former finance minister Malusi Gigaba’s February budget, the state is facing a R27.4bn revenue shortfall for 2018, and a R85bn shortfall in revenue over the next three years.

Mark Kingon, the acting head of SARS said the VAT refund backlog was concerning, and the tax agency was investigating how it came about.

Asked whether the backlog was intentional or not, Kingon said he could not say. “This is open for debate. What I can say categorically is that it is not correct.”

There were no changes to VAT or the tax rate, but the state did announce that three items – white bread flour, cake flour and sanitary pads – would be zero rated from next year.

The revenue cost from zero-rating these items is estimated to be R1.2bn.

Debt service costs - the interest that the SA state has to pay on money it has borrowed, have become one of the fastest growing items in the budget. In the revised 2018/2019 year, the state is expected to pay R181bn in debt-service costs. This will grow to R247bn in 2021/22. The service costs are increasing by 10.9% per year.

National Treasury has downgraded the expected 2018 growth rate to 0.7%, in line with projections previously made by the IMF, the World Bank and the SA Reserve Bank.

While the National Development Plan – the state’s long-term blueprint for growing the economy and cutting unemployment – has a goal of 5.4% annual GDP growth, SA’s GDP growth has averaged just 1.8% over the past decade.

SA’s economy would need to grow roughly 8 times as fast as it is expanding at the moment to the reach the NDP’s goal.

“The economy has not performed as expected,” states the policy statement. The document notes that when Gigaba tabled the 2018 budget in February there was a “sense of optimism that confidence and investment would recover on the strength of improved political certainty.”

National Treasury predicts that economic growth will grow to 1.7% in 2019 and 2.1% in 2020. Risks to this increase include rising international trade tensions, risk aversion investment in emerging market economies, the falling rand, and higher borrowing costs.

It has also flagged policy uncertainty, the poor state of state-owned enterprises, a risk of higher inflation linked to the falling rand and “higher fuel and electricity prices” as possible negatively affecting local growth.

Treasury pointed out that SOEs with a poor financial position pose a fiscal risk. "Without restructuring, there is a significant risk that the weak financial condition of state-owned companies will put major pressure on the public finances."

The state expects government spending to continue to outpace inflation over the medium term. Consolidated government expend ire – the sum total of all the spends – is expected to break through the R2trn mark in 2021/22 to reach R2.091trn.

Despite moderate GDP growth projections – National Treasury says that state spending growth will continue to outpace inflation, increasing by 7.8% a year. However debt service costs growth will in turn outpace spending growth, at an average of 10.9% over the medium term.

The MTBS notes that the state’s wage bill remains the largest item in the budget, and wage increase above inflation this year had left a R30.2bn shortfall over the period of the agreement, when compared to projections in the 2018 budget.

Ramaphosa's economic stimulus package and recovery plan is one of the three policies government will prioritise in the medium term – together with reforms at state-owned companies and improving state financial management.

To support the economic recovery plan – which Ramaphosa announced in September to kickstart the lagging economy - government will reprioritise spending and restructure grants to the tune of R48m over the next three years to programmes designed to boost growth. An additional R1bn will come from centralising spending for housing subsidies.

R5.1bn has been earmarked for in-year adjustments for the current year for school building projects and drought and water infrastructure improvements.

Analysis of public sector compensation spending since 2006-07 reveals that the main driver of increased spending is large increases in wages and other employee benefits, rather than increases in employment.

The national expenditure estimates went on to say that increases in average real wages are partly owed to above-inflation agreements reached between government and unions. However, it said wage progression and promotion policies account for a considerable proportion of the rise.

“Wages have increased most rapidly in the lowest ranks of the public service, compressing wage distribution. Overall, the number of public servants has increased since 2006-07. Employment peaked in 2012-13, after which personnel numbers have fallen by just over 1%,” it said.

The policy statement notes the outlook for sovereign ratings remains stable, adding that a downgrade would lead to higher risk premiums and capital outflows.

Of the three major ratings agencies only Moody’s still has SA’s sovereign debt rated at above investment grade.

We live in a world where facts and fiction get blurred
In times of uncertainty you need journalism you can trust. For 14 free days, you can have access to a world of in-depth analyses, investigative journalism, top opinions and a range of features. Journalism strengthens democracy. Invest in the future today. Thereafter you will be billed R75 per month. You can cancel anytime and if you cancel within 14 days you won't be billed.
Subscribe to News24
Related Links
What do you hope Minister Tito Mboweni will address in his budget:
Markets LIVE: Rand trading at 3-week best levels as focus turns to Tito Mboweni
#MTBPS2018: 10 hot topics Mboweni may tackle
Next on Business
BUDGET WRAP | 'Boring but responsible' - finance minister gets thumbs-up from economists