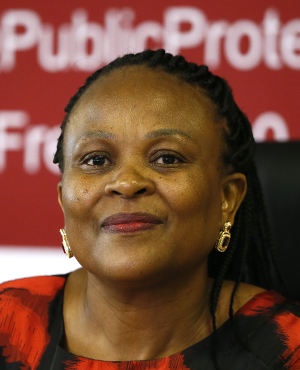 As South Africa awaits a crucial rating decision from Moody’s on Friday evening, Public Protector Busi Mkhwebane has weighed in with a veiled attack on the global credit ratings system.

In the early hours of Friday morning, Mkhwebane tweeted:

God deliver us from these rating agencies and oppressors of the downtrodden for economic freedom in our lifetime and generations to come.

Moody’s currently rate South Africa’s at Baa3, the last rung before a sub-investment grade rating, or junk. The agency has so far kept the country’s outlook stable.

Other agencies, Fitch and Standard & Poor's relegated South Africa to junk status in 2017. They have been critical about a lack of economic reforms in South Africa, ballooning public debt and the burden placed by the country's state-owned enterprises on the fiscus.

Their downgrades were met with harsh criticism from the Zuma government, with KwaZulu-Natal provincial chairperson, Sihle Zikalala  accused the credit rating agencies of waging an economic war against the country and  Zuma.

In response to the impact of their downgrades,  former minister of water affairs and sanitation, Nomvula Mokonyane, told ANC supporters in a rally, "Let the rand fall, we will pick it up".

There has also been calls by BRICS nations to establish its own credit-rating agency to service developing economies.

If Moody's downgrade South Africa all the way to junk, global foreign investors - who aren't allowed to hold junk bonds in their portfolios - will be forced to sell an estimated R200bn in South African government bonds. This could hurt the rand, as foreigners bail out of local assets.

A junk rating will also push up the interest rate investors demand from the SA government, which will raise the cost of government borrowing.

The agency is expect to release its latest decision on SA's rating later on Friday.

We live in a world where facts and fiction get blurred
In times of uncertainty you need journalism you can trust. For only R75 per month, you have access to a world of in-depth analyses, investigative journalism, top opinions and a range of features. Journalism strengthens democracy. Invest in the future today.
Subscribe to News24
Related Links
Mboweni: Pray we don't get a downgrade
'I think Moody's will be happy' - Ramaphosa says plan to deal with Eskom debt imminent
Moody's upgrades Sanral from negative to stable
Next on Fin24
BUDGET WRAP | Mboweni holds off on major tax increases, promises R19.3 billion for vaccine rollout