The rand lost 2.6% against the US dollar to break through R15 in reaction to a grim medium-term budget statement.

By late afternoon on Wednesday, the currency was trading at R15.01, from R14.51 at the start of the week.

The key problem, again, has been a lack of economic growth, following a stagnant first half.

The estimate for economic growth in 2019 has been revised down sharply, to 0.5% from the 1.5% expected in the February Budget.

"Government finances are clearly in an unsustainable state, with much better expenditure control and greatly improved economic growth the only solutions," says Nedbank.

"It is difficult to imagine the sovereign ratings agencies taking an optimistic view of the country unless significant changes are made."

The stakes are extremely high: on Friday, Moody's will announce its credit rating for South Africa. It's the only agency that has not yet "junked" South Africa.

The rand started weakening on Tuesday in response to government's rescue plan for Eskom, which was presented by Minister of Public Enterprises Pravin Gordhan. Gordhan said Finance Minister Tito Mboweni would expand on plans to deal with Eskom's R450bn debt burden. 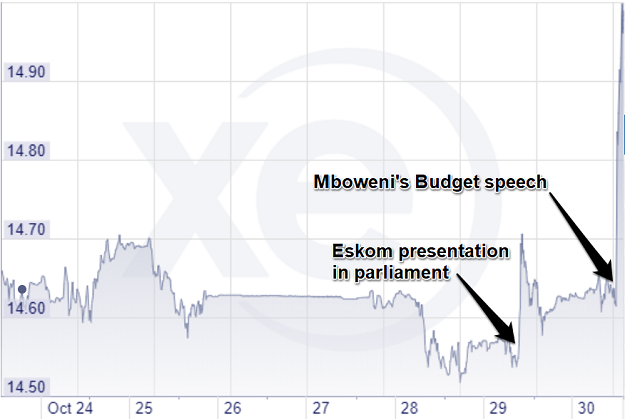 But Mboweni again kicked the can down the road on Wednesday, failing to announce any strategy to restructure Eskom's debt.

The government will only make an announcement on how it will help the struggling power utility reduce its debt burden once it has seen evidence of a commitment by Eskom to become more competitive and cut costs, Mboweni said.

Mboweni emphasised that debt is accelerating at an unsustainable pace in a dismal economic landscape. He stressed that a weak global environment is adding to pressure on the local economy, and that drastic action is needed to ensure that SA creates a sustainable economic environment.

Bianca Botes, Treasury Partner at Peregrine Treasury Solutions, welcomed Mboweni's undertaking that government will in future only extend loans to state-owned entities - and expect to be paid back.

"Cashflow support to SOEs will be in the form of loans, no longer equity, which should offer some offset for the rating agencies. It also means that the SOEs need to learn to fend for themselves."

Jameel Ahmad, global head of FXTM, expects that the rand will continue to weaken - especially if the US Federal Reserve holds back from cutting interest rates in the United States later on Wednesday evening.

MTBPS2019: Rand is not reacting well at all. Losing 2.5% to 2.7% against all major currencies. Here it is on an hourly basis. The first huge surge (weakening) was between 2:00 and 3:00pm. pic.twitter.com/DXSCsXl9NR

We live in a world where facts and fiction get blurred
In times of uncertainty you need journalism you can trust. For 14 free days, you can have access to a world of in-depth analyses, investigative journalism, top opinions and a range of features. Journalism strengthens democracy. Invest in the future today. Thereafter you will be billed R75 per month. You can cancel anytime and if you cancel within 14 days you won't be billed.
Subscribe to News24
Related Links
Budget: SARS gets R1bn to help with tax collection
Mboweni's medium-term budget in a nutshell
These 6 charts show what Mboweni is battling in today's budget
Next on Fin24
BUDGET WRAP | 'Boring but responsible' - finance minister gets thumbs-up from economists