Treasury has cut economic growth forecasts, plans to reduce state spending and won’t provide tax relief for citizens as it seeks more funds to prop up debt-laden state-owned companies, including yet another record bailout for power utility Eskom, which last week struggled to keep the lights on.

The National Treasury forecast a fiscal gap of 4.5% of gross domestic product for the year starting April 1. If realised, it would be the worst since the 6.3% reported in fiscal 2010, and bigger than the estimate in a Bloomberg survey.

The Treasury reduced the forecast for expansion in gross domestic product this year to 1.5% from 1.7% estimated in October, and cut growth predictions for the next two years. The economy that hasn’t expanded by more than 2% since 2013. 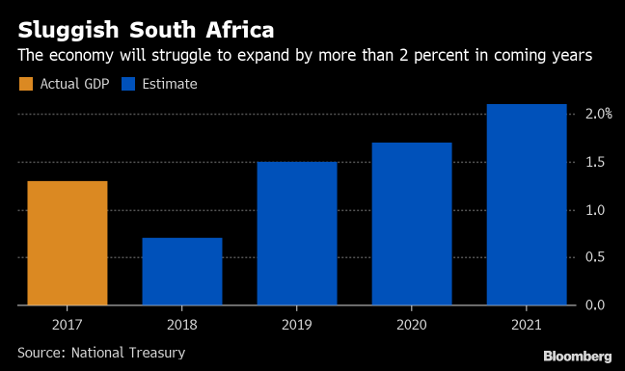 Forecasts for gross debt as a percentage of GDP are worse than the October estimates for every year through 2027, with the figure expected to stabilise at 60.2% in 2023-24 compared with the prior prediction of 59.6% for the same year. The slippages come as the Treasury provides a R23bn lifeline to loss-making power utility Eskom in each of the next three years. 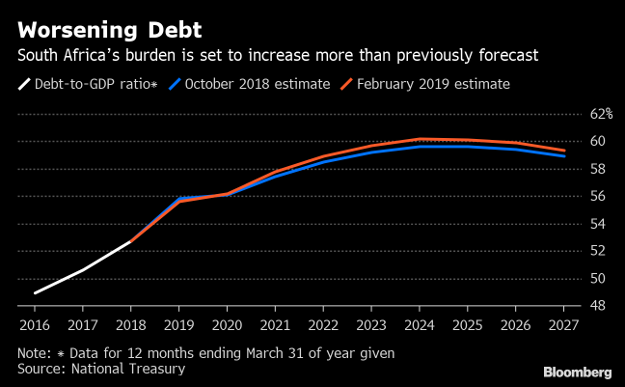 The fastest-growing expenditure item in the Budget is debt-servicing costs, with the country spending R182.2bn in fiscal 2019, rising to R247bn by 2022. South Africa is “borrowing about 1.2bn rand a day, assuming we don’t borrow money on the weekend,” Mboweni said. Related Links
Mboweni: Plum season is over, but it can come again
#Budget2019: Cosatu says government failed to 'rise to the occasion'
From Eskom to tax, this is Mboweni's budget in a nutshell
Share
Next on Fin24
ANALYSIS | Mboweni's zero-based budget - the backstop before a spiralling debt crisis?