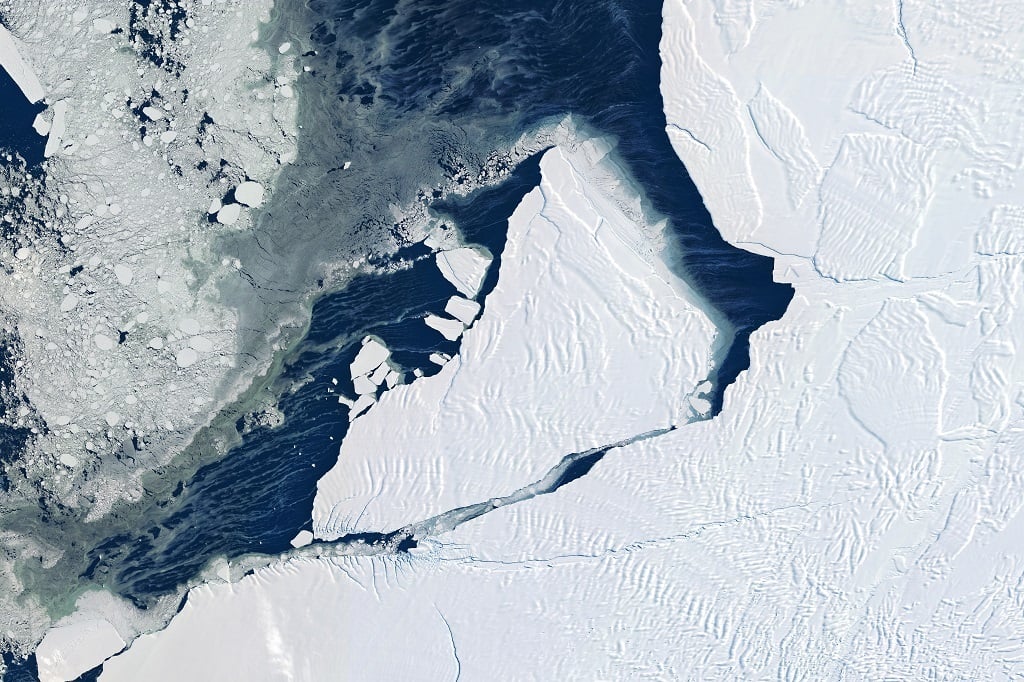 As global temperatures rise, there are concerns that warming will trigger tipping points that lead to the irreversible melting of ice sheets and rising sea levels.
Gallo Images/Orbital Horizon/Copernicus Sentinel D

The runaway collapse of the West Antarctic Ice Sheet - which would trigger catastrophic sea level rise - is not "inevitable", scientists said Monday following research that tracked the region's recent response to climate change.

As global temperatures rise, there is mounting concern that warming could trigger so-called tipping points that set off irreversible melting of the world's massive ice sheets and ultimately lift oceans enough to drastically redraw the world map.

New research published Monday suggests a complex interaction of factors affecting the melting of the West Antarctic Ice Sheet, which is home to the enormous and unstable Pine Island and Thwaites glaciers - nicknamed the "Doomsday glacier" - that together could raise global sea levels by more than three metres.

Using satellite imagery as well as ocean and climate records between 2003 and 2015, an international team of researchers found that while the West Antarctic Ice Sheet continued to retreat, the pace of ice loss slowed across a vulnerable region of the coastline.

Their study, published in the journal Nature Communications, concluded that this slowdown was caused by changes in ocean temperatures that were caused by offshore winds, with pronounced differences in the impact depending on the region.

Researchers said that this raises questions about how rising temperatures will affect the Antarctic, with ocean and atmospheric conditions playing a key role.

"That means that ice-sheet collapse is not inevitable," said co-author Professor Eric Steig from the University of Washington in Seattle.

"It depends on how climate changes over the next few decades, which we could influence in a positive way by reducing greenhouse gas emissions."

The researchers observed that while in one region, in the Bellingshausen Sea, the pace of ice retreat accelerated after 2003, it slowed in the Amundsen Sea.

'Blink of an eye'

They concluded that this was down to changes in the strength and direction of offshore surface winds, which can change the ocean currents and disturb the layer of cold water around Antarctica and flush relatively warmer water towards the ice.

Scientists are increasingly concerned that the Pine Island and Thwaites glaciers have reached a "tipping point" that could see irreversible melting irrespective of cuts to greenhouse gas emissions.

Anders Levermann, a climate scientist at the Potsdam Institute for Climate Impact Research who was not connected to the latest study, welcomed the approach of bringing together multiple observations and records, although the study period was "the blink of an eye in ice terms".

"I think we still have to live and plan and do our sea level projections and coastal planning with a hypothesis that the West Antarctic Ice Sheet is destabilised and we will get three and a half meters of sea level rise just from this area of the planet alone," he said, adding however that this would happen "over centuries to millennia".

The United Nation's science advisory panel for climate change, the IPCC, has forecast that oceans will rise up to a metre by the end of the century, and even more after that.

Hundreds of millions of people live within a few metres of sea level.

While cutting planet-warming emissions is seen as the first and most important way to halt the melting of the West Antarctic ice sheet, scientists have also come up with an array of hi-tech suggestions for saving the gargantuan ice shelf and staving off.

Levermann has researched ideas including using snow cannons to pump trillions of tons of ice back on top of the frozen region.

Other suggestions have included constructing Eiffel Tower-sized columns on the seabed to prop it up from below, and a 100m-tall, 100-kilometre-long berm to block warm water flowing underneath.